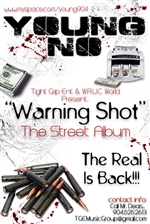 Team Randolph MMG&TGEMusic Group Presents... "YOUNG-NO" 26-Year old Hip-Hop Artist and Fashion designer from Jacksonville, Fl Young-No made is enterance in the world of hip-Hop with his debut mixtape "Best Kept Secret" that was released in 2005. 3... Read More

Young-No made is enterance in the world of hip-Hop with his debut mixtape "Best Kept Secret" that was released in 2005. 3 years later, Young-No followed up with his 2nd release "WARNING SHOT" that took over the streets along the eastcoast.

When Young-No is not in the studio working on music, he's in the office drawing up new designs for "WILLIAM RANDOLPH" Clothing. Be on the look out for the official launch next year in 2011.

Enjoing music and videos from YoungNoTGE... cool. Drop them a few dollars for support below.