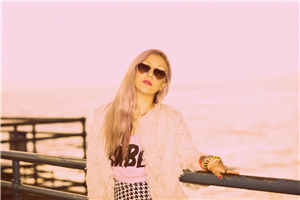 Twitter: @WilmieFACEBOOK PAGE : www.facebook.com/wilmiepieroniListen to my songs on my soundcloud:http://soundcloud.com/wilmiehttp://wilmie.com.brWilmie Pieroni de Barros (born on July 28, 1990) is a singer/songwriter from Brazil who lives in New Yor... Read More

ASHELYN SUMMERS PIANO POP meets STRING QUARTET meets MODERN ROCK Her rich, nuanced vocals will capture you the moment you hear them. And perhaps there is no better introduction than &ldquo;Willful Amnesia&rdquo; - with her voice set poignantly ...

Listen to my songs on my soundcloud:http://soundcloud.com/wilmie

Wilmie Pieroni de Barros (born on July 28, 1990) is a singer/songwriter from Brazil who lives in New York.

Wilmie was born in Rio de Janeiro, Brazil, where she started her career. She always loved singing since she was a little girl and she grew up listening to Madonna, Britney Spears, Mariah Carey, Spice Girls and Christina Aguilera.When she was 7 she took some piano classes with her uncle and also recorded a lot of videos of herself performing her favorite songs, she also used to create her songs recording on her mini radio with a microphone singing and recording using music tapes.At age 12 she started writing some lyrics for fun and singing around with her friends but when she turned 16 she recorded her first song to put on the internet. Friends and others kept supporting and she started taking it more seriously to a career level. She recorded a lot of demo songs, one of these songs was Nothing that I can do which she produced with her cousin and also she composed it.She kept creating, writing and singing and in 2010 with 19 she did some performances in a Music Institute where she had vocal classes and also she started to play guitar.Still in the same year she participated in some concerts with a cover band, singing in clubs and weddings. Also in the same year she recorded her first teaser that goes with one of her instrumentals song.In 2011, Wilmie started the Lights Off project which was finished in 2012. The song was produced by a Brazilian producer, and written by Wilmie.In 2013 her demo Faster which she wrote and produced was finally ready and she recorded a promo video for it.In April Wilmie moved to NYC, she performed a few times on the East Village, Manhattan and once she was living in NY, by herself she contacted a video director to shoot her first official music video for Lights Off which is on VEVO right now! Now shes working on her new EP to be release in 2014.

Enjoing music and videos from wilmie... cool. Drop them a few dollars for support below.