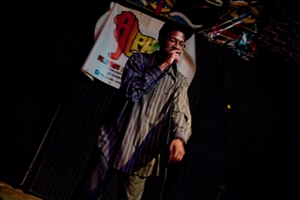 Tru Rhyme (Robert Edwards II) is the first hip-hop artist to sign with the hot new label I Can Music Records. Born in 1982 the Pensecola, Florida native knew that he was destined for a career in the music business from a very young age. As a child hi... Read More

yo!! whats going on world, im new to the scene.. upcoming artist from the mid-west region trying to create a buzz. open to all collabs, im very versatile and easy to work with. feel free to download my music, comment on it and tell me what u like, vi...

Supa Emcee is the illest lyricist rep'n Ohio with a furious disposition and a untamed hunger for success. His latest album just released on itunes "Don't Wake Me" featuring Freeway and Wordsworth. It's a excellent follow up to "A Brother From Another...

KTS King of the Streets

Tru Rhyme (Robert Edwards II) is the first hip-hop artist to sign with the hot new label I Can Music Records. Born in 1982 the Pensecola, Florida native knew that he was destined for a career in the music business from a very young age. As a child his father, who would play guitar and constantly have records spinning in the house, sparked his passion for music. As he got older and went through school, he quickly learned that he had an undeniable and natural talent for poetry. With his love of music and the talent to bend the written word to his will, it was only a matter of time before his journey as an Emcee began. He got his start in the rap game like many hopeful hip-hop artists, by writing as much as possible and recording with whatever he could. He spent hours upon hours using tape recorders, karaoke machines, and keyboards to produce songs with his brothers. As time went on, their hustle evolved into their first organized venture into the music business with the group High Rollin G’s under their own label High Rollin Records. The group lasted two years, until Tru Rhyme had to move on to the next phase of his life studying architecture at Florida A&M University. At FAMU he couldn’t deny the grip that hip-hop had on him. When he wasn’t in class or studying, he tirelessly worked to hone his skills with the microphone. No longer new to rapping, he got organized and started putting out mix tapes including his first solo project “Da Games Gotta Have Me”. These recordings didn’t go unnoticed, and he soon found himself signing his first deal with the Tallahassee indie label J. Ssentric Entertainment. This relationship ended in 2009, but it didn’t stop Tru’s grind. Tru Rhyme’s path soon led him to the CEO of I Can Music Records. Jerfson couldn’t deny his talent, and knew that he needed him to represent his new label. Being the quickly growing label’s first hip-hop act, Tru is now primed to use his God given talent to reach new heights in the music business. With an unmistakable Southern style, and the ability to deliver a powerful message with his lyrics; Tru Rhyme is ready to fill hip-hop’s need for an artist that’s the perfect blend of swag and substance.

Enjoing music and videos from Tru Rhyme... cool. Drop them a few dollars for support below.