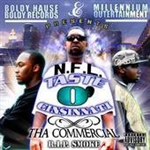 ARTIST NAME: TIM-E2X&rsquo;$ Born and raised in Cincinnati, Ohio. I started using my god-given talent at the age of 15. At 17, I was highly recommended to freestyle for a local group &ldquo;NFL.&rdquo; At 19, after I recorded my first song, &ldquo;... Read More

I’m an independent artist I’m 24 just did 7 years in prison is now released from having a two month battle with the courts now I’m here to pursue my dreams of being a top charting genre crossing Platinum Artist of this Century .My Instagram is @Age...

ARTIST NAME: TIM-E2X’$ Born and raised in Cincinnati, Ohio. I started using my god-given talent at the age of 15. At 17, I was highly recommended to freestyle for a local group “NFL.” At 19, after I recorded my first song, “When I hit yo set,” I became a certified member of “The NFL.” With songs like “Last name blaze”, “The streetz don’t luv uz” off the underground LP, we started to create a name for ourselves outside of our neighborhood. With one foot on the stage and one foot in the streets, I became incarcerated as a result of having to support not only my family but trying to give the streets what they wanted. After doing 10 months in Lebanon Correctional Institution, I became even more determined to pursue my dream of becoming a rap artist. In 2008, we released the street classic mix tape, “Taste O Cinsinnati” which created a crazy buzz and created a wider fan base. I started opening up for artist like Lil Wayne, Gucci mane, Trina and T-Pain. We just currently finish THE N.F.L.’S sophomore album.

Enjoing music and videos from TIM E2X... cool. Drop them a few dollars for support below.