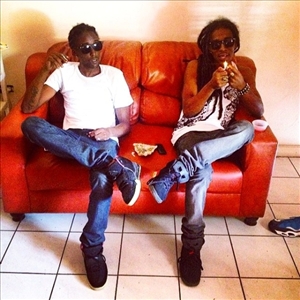 The ReptilianzStarted in 2012, The Reptilianz is a Jamaican based hip-hop group that is represented by some cool ass aliens disguised as Jamaicans, who came to conquer earth taking over the hip hop game and saw that the earthling women were beautiful... Read More

The ReptilianzStarted in 2012, The Reptilianz is a Jamaican based hip-hop group that is represented by some cool ass aliens disguised as Jamaicans, who came to conquer earth taking over the hip hop game and saw that the earthling women were beautiful who have no idea they are all hybrids and need our energy for ascension.Welcome to our World!! A world without fear or limitations. Everything you were taught in school to be fiction is actually factual. Aliens are Real. God is an Alien. We are the Reptilianz!!!Hip hop originated from dancehall which originated in Jamaica so the mathematical equation that we worked out reveals that the greatest rappers to come to earth will originate in Jamaica,hence we chose Jamaica. On another notion Americans would consider The Reptilianz as Aliens in their country whether legal or illegal so its not hard to fathom the alien concept for those who prefer a more simpler way looking at it. Any body can be "alien" which The Reptilianz applied a meaning to that many people if not everybody can relate to at some point in life.If you ever feel alone or you dont belong or you dont fit in which im sure we all relate to at times can make you feel like an "alien" Any thing going against the norm will give you this feeling. If you ever feel unusual or different for even a short period at times you can be proud to say youre an "alien" and know "you are not alone" after hearing our music.We are not depending on street credibility. We are creating our own lane (world) and we are coming in the game as the first ever from Jamaica with a surprisingly pleasing flow and unique ingenious lyrics that are so provocative it will sway the head of any critic.Several mainstream artist who have influenced hip hop greatly have Jamaican roots tied to them (not to mention DJ KOOL HERC who is the #FatherOfHipHop) and a couple are considered to be in the top 5 greatest pioneers of all times those being Busta Rhymes and Biggie Smalls.They are also aliens but it was not time for disclosure. This is the new world. Various island originated artist are being accepted in hip hop right now including Nicki Minaj, J Cole, Rihanna, and the one hit wonder Trinidad James. Currently there is a heavy focus on Jamaicans and Reptilians in the hip hop videos examples are Busta Rhymes, Nicki Minaj, Kanye West, (on his new album called "Yeezus") Asap Rocky Lil Wayne and Flo Ryda who are all mainstream artist.This may seem like we were not the first with the Reptilian idea but this also only paves the way for the ones who can execute the best.Hooks Amero and Six the Reptilian are the names of these two aliens and AMG Records (Alien Muzic Group) is the name of the label and what they represent and this is the world that they bring to the table. (Anglo-America).

Enjoing music and videos from The Reptilianz... cool. Drop them a few dollars for support below.