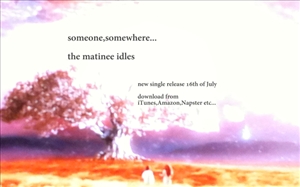 the matin&eacute;e idles (aka kevin barry & co.)are from Dublin, Ireland & were formed in 2008 after lead singer/songwriter & producer Kevin Barry released his critically acclaimed debut album "Looking for Murphy" Following on from the release of ... Read More

Following on from the release of "Looking for Murphy" Kevin signed a 3 year licensing deal for 2 of his songs to a publishing company in Los Angeles USA. They have placed songs in numerous Hollywood block buster films.

In 2010 Kevin released a song called "everything" along with a video from his upcoming album "a festival of colours", the video was filmed in the popular pub "The Stags Head" in Dublin & it went on to be nominated for an IMTV award. This song was also signed to a New York publisher.

Press: “Kevin plays and experiments with sounds and instruments in his songs to provide the listener with a unique but compelling musical experience….. This an album of the highest quality forged in the fire found only in the belly of someone who really believes in what they do. Buy it..." Music Review Unsigned UK “The first thing you notice when you listen to Looking For Murphy is Kevin Barry's voice, bruised, battered but utterly brilliant…… each listen to the record reaps new rewards…” Hot Press Ireland “Songwriter whose powerful voice and thoughtful lyrics have finally begun to attract the kind of acclaim he deserves…." On the Verge Dublin "Everything" is used in a very deep and passionate way, it almost is at one with every note and chord progression, I like dynamics in the song as they really lift the melody, it’s like a breath of fresh musical air to the ears, Trevor Halpin Music review unsigned

One great song is Everything, this band are sure to make it big, after hearing this musical snippet. It’s worth checking out, and pay attention to the imagery- it’s quite interesting.

Enjoing music and videos from the matinee idles... cool. Drop them a few dollars for support below.