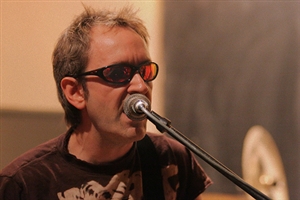 Sugar Gliders is a vehicle I (Steve Wright) created here at Taupo in January 2008. This enables me to perform songs I write and produce in my home studio live. Most times I will invite locally based musicians to join me on stage. Or sometimes I may d... Read More

A mix of indie pop, punk, and electronic music

Sugar Gliders is a vehicle I (Steve Wright) created here at Taupo in January 2008. This enables me to perform songs I write and produce in my home studio live. Most times I will invite locally based musicians to join me on stage. Or sometimes I may do it as a solo artist with loops. This enables me to draw from my huge catalogue of varied styles of original songs and tailor it to the needs of the venue. These songs could be anything from acoustic singer/songwriter to alternative rock. Currently Sugar Gliders music is now being streamed in 22 states in the USA. August 2011 Chicago based program Jeff Popka (Classic) indieonair plays Revolution Girl. Taupo Classic FM Brendon Weatherley interviewed me and I performed live. July New York City based radio stream program Hot Wax at IRMG plays Revolution Girl for 3 weeks and also run giveaway program. May Industry Review Andros Georgiou (iplacemusic.com) says I like the idea here and what Steve Wright, is trying to do with the fusion of Rock and Electronic music. Re Release single I Got This Feeling (Find A Way) through Tunecore. April Sugar Gliders sign with Music Supervisors in US with view to using songs in films/TV. Industry Review Leslie J Bailik (musicXray) This song is catchy and made me bounce my head to the rhythm. June 2010 Sugar Gliders release single I Got This Feeling (Find A Way) through Tunecore. April Closeup tvnz1 features video of I Got This Feeling as potential 2011 Rugby World Cup Song. Nov 2008 Andrew Leiataua More FM Taupo features song 2 Wheels on his morning show. May Right on Course wins out of over 90,000 vote’s best song KFC Sounds from Your Home Town Central Districts North Island. January 2008 I create project known as Sugar Gliders. Some previous achievements of myself before Sugar Gliders. 1997 -2007 Performed live regularly throughout UK with various line- ups under name of Potion. 1996 TNT UK magazine Vince Lovegrove interviews me and feature a story about Potion Australia. Nominated Australian Performing Rights Association (APRA) co writer for Unashamed video of the year. . 1995 Nominated (APRA) co writer for Unashamed song of the year. EMI Music Publishing Australia and Sir Paul Mc Cartney accept my band Potion’s new take on Get Back for sale. I was co- arranger of this new take on such a classic. 1991 Elected Editor of Society of Australian Songwriters feature interviews with Slash/Duff. 1989 Record with producers Gerry Nixon (Kylie Minogue/EMI) and Tom Lubin (Santana/Led Zeppelin)

Enjoing music and videos from sugargliders... cool. Drop them a few dollars for support below.