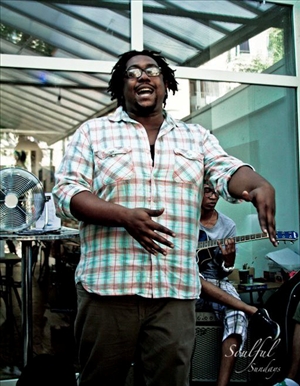 Combining classic elements of hip-hop, soul, funk, and jazz, singer-songwriter Suave is in a genre of his own innovation. His soulful original lyrics laid smoothly over hard-hitting, yet melodiousbeatsand live instrumentation give Suave’s musical pro... Read More

Kat Perez is as eclectic as her music--she sings, writes songs, produces beats, and composes & arranges music--so naturally with every song she brings you soul--&gt;Eclectic Soul.

SoFree. So Real. So Fine. So Right! Ms. SoFree, raised in the SouthEast, has been singing since she could utter sounds. From the tender age of 9, SoFree has been creatively challenging herself with writing and arranging her ...

I am a student at community college of Philadelphia studying sound recording & music technology. If you are a artist looking for music production please hit my website for contact info.

Combining classic elements of hip-hop, soul, funk, and jazz, singer-songwriter Suave is in a genre of his own innovation. His soulful original lyrics laid smoothly over hard-hitting, yet melodiousbeatsand live instrumentation give Suave’s musical productions the genuine character and artisanal flavor often lacking in mainstream music.

Raised in the uptown neighborhoods of New Orleans, LA, there was ample opportunity for Suave to become yet another statistic of the city boasting some of the highest murder and violent crime rates in the country. Despite its harsh climate, it was Suave’s love for his city and its unique musical heritage that made survival in the N.O. possible. Suave has often tells his fans, “If it weren’t for music, I would have been gone. Music saved my life.” It is that reverence for music that influences Suave to craft real art with his unique talent. Shunning gimmicks, mimicry, and over-production, his music comes directly from the heart of a man who has beaten improbable odds and challenges his audience to do so as well.

Suave reconnects us with the spirit of soul music. His thought-provoking lyrics and subtle baritone harmonies take us on a ride through the thoughts of a young black man striving to better himself and the world. – Justin Ivey,KevinNottingham.com

Having been raised in the Southern Baptist Church, Suave, known then as Nathaniel Cameron, Jr., first began honing his vocal skills in the choir at the tender age of eight. Formal vocal training and musical instruction soon saw Suave writing his own original songs and winning local talent shows before he had even entered highschool. “By then,” Suave says, “I knew music was my passion. I wanted to write, sing, record, engineer, perform. If it had to do with music, I had to get my hands on it.”

That drive and dedication soon earned him the attention of New Orleans rap heavy-hitter, Juvenille, and his smooth voice and calm demeanor secured the stage name he still performs under today. “They all started calling me Big Suave while we were in the studio preparing for the tour. After that, it just stuck.”

What also stuck were the insights into the music industry that Suave picked up while traveling the road with such a huge production. Having seen both the good and the bad associated with touring, record labels, and fame, Suave gained themusic businesssavvy necessary to build and maintain the kind of career that won’t jeopardize the integrity of his art. “That’s what my songDon’t Sell Your Soulis all about,” he muses. “I know how easy it is to make compromise after compromise until you end up losing who you are. No amount of success is worth that to me.”

Armed with that determination, a Bachelor of Sciencedegree inMusic Business from Tennessee State University, and a successful internship at EMI Nashville, Suave went on to establish the BFAMMusic Group in 2009, an all-inclusive cooperative of artists, producers, engineers, graphic designers, and consultants whose goal is to support the efforts of independent musicians who aspire to remain true to themselves on their road to success. “BFAM stands for Brothers From Another Mother; we’re a family. Our code is simple – loyalty, trust, and respect. That and a genuine love for what we do is what makes this work.”

In collaboration withThe Guerilla Publishing Co.,Inner Recess Studios,All Work/ No Play Productions, and more, BFAM and Suave have been a part of over twenty-four independent productions in 2011 alone. “It feels good to have put that much music out there, to be a part projects that come from the hearts and minds of my contemporaries, my family. It’s all love.”

In 2010, Suave joined forces with a talented group of like-minded, independent artists from New Orleans to form theLiberated Soul Collective. After coming together for regular jam sessions at BlackStarBooks & Caffe’sLiberation Lounge event, Suave,Elliot Luv,Tarriona”Tank” Ball, Sybil Shanell, and theBlackStarBangasdecided to take their funky blend of soul music on the road. Their 100% fan-funded tour gave the band the opportunity to perform for venues in New York, Philadelphia, Atlanta, Mobile, Gulfport, Cincinnati, Baltimore, Austin, Houston, and more, exposing a broader audience to the groovy sounds of Suave’s original tunes and his energetic stage presence. “I grew as an artist and as a person so much during that tour; I couldn’t have been blessed to do it with a better group of people. When I came home, my music and my mentality had changed – for the better.”

Now Suave has set his sights even farther, cultivating relationships with audiences and artists outside of the United States. In 2012, he began his European networking tour, sharing his music and working on new projects in the UK, Germany, and The Netherlands. NamedUK Unsigned Hype‘s April 2012 “Artist of the Month,” he is already receiving a warm welcome abroad. “No matter the cultural or language barriers, the music is the message. People all over the world are responding it to it – what more could I ask for?”

You can learn more about Suave, find exclusive new music, and stay up-to-date on live performances by subscribing to hisFacebook PageandTwitterpages. For booking information, please contactsuaveishere@gmail.com.

Enjoing music and videos from SuaveIsHere... cool. Drop them a few dollars for support below.