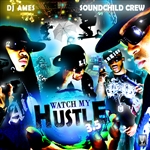 rapper from the Cincinnati area, mostly freestyle artist but write alot too. i'm all over the internet hit me up show love and i'll return it. much luv to every1 out there grindin.

SUP, MY NAME STARKS. IM AN ARTIST OUT OF JERSEY JUST TRYIN GET MINES... BEEN DOIN IT FOR 15 YEARS AN COUNTIN... IM NEVER GONE STOP!!! MY LOVE FOR THE MUSIC IS TO DEEP.. YOU CAN GO TO REVERBNATION.COM/STARKS6BLOCK AN DOWNLOAD THE TRACK YOU HEAR ...

MTV’s “Pimp My Ride” featured SOUNDCHILD CREW won the Indie Rap Artist Of The Year Award at the 2008 Southern Entertainment Awards and Indie Group Of The Year at the 2009 SEAs. SC also took home the 2009 Group Of The Year Award at the Knocdown Indie Awards in Memphis, TN. With 21 Award Nominations at numerous Awards Shows, SoundChild Crew is definitely a force to be reckoned with. SoundChild Crew is a hip hop group that is dedicated to honing their skills and perfecting their craft; because of this, they are quickly becoming one of the hottest acts to emerge from the South. The SoundChild Crew is also in negiotiations with Midway Games for licensing, among other things. The Crew has had numerous performances throughout the country and have been invited to perform in shows all over the United States in the “Emergenza Festival” (112 venues across the U.S. including the Avalon in Boston, the Metro and Double Door in Chicago, the Hi Tone Café, and the Young Avenue Deli and New Daisy Theatre in Memphis). They are currently featured on numerous mixtapes around the world including mixtape projects with Dj 007, All Access DVD Magazine’s Street Credibility, Dj Vlad The Butcher’s “Tales Of A Dying Breed”, Houston’s Dj Bull (Dirty 3rd Records), Dj Ame’s UK Mixtape Messiah “Grind Time 26,” Boston’s Dj Shureshot “Durty South Shootout” Series, Dj Cosinus’ “RnB 2 Hip Hop,” and Dj Madgik’s “Southern Explosion.” They have also interviewed and featured on college radio stations, mixshows, and online publications around the globe including Detroit, Las Vegas, Chicago, Little Rock, Fayetteville, Los Angeles, Houston, St. Louis, New York City, BBC, Poland, Japan, and Shady 45 Satellite Radio. SC has been featured on numerous websites, publications and dvds, including Ozone Magazine, Street Credibility DVD, Block2Block Magazine, SEA Magazine, and DV8 Magazine, MemphisRap.com and many more.

Enjoing music and videos from SoundChild Crew... cool. Drop them a few dollars for support below.