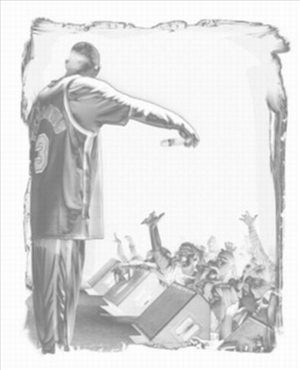 ShoreShot, is a performing hip-hop artist/songwriter/ lyricist who hails from the great state of New Jersey. Mastering his craft since 2001, ShoreShot's music is best described as an authentic blend of hip-hop and r&b soul accompanied by distinct voc... Read More

ShoreShot, is a performing hip-hop artist/songwriter/ lyricist who hails from the great state of New Jersey. Mastering his craft since 2001, ShoreShot's music is best described as an authentic blend of hip-hop and r&b soul accompanied by distinct vocals, proper mechanics, and a sharp flow.

After being featured on numerous mix tapes on the East Coast early in his career, ShoreShot was soon being booked for live performances - opening for acts such as Maino, Nappy Roots, and Trina. In July of 2010, ShoreShot released his debut album entitled, "Slowly but Shorely", which was quickly adopted as a summer soundtrack along the Jersey Shore.

Linking up with NJ-based singer/producer, EWald, shortly afterwards, the two hit the studio and began collaborating on ShoreShot's sophomore project. The result was "The ProgreSS Report" - a melodic and dynamic journey of HipPopSoulRock rooted in diversity, crowned with originality, and laced with talent. It's a 20 track rocket ship that will take you wherever you want to go, powered by undeniable hits like "One Request (DJ)" and "Steal Her". The album is currently available for purchase EXCLUSIVELY at SHORESHOTmusic.com and accompanied by a free "ShoreShot" tee of your choice.

ShoreShot was recently featured in SKOPE Magazine's (skopemag.com) September 2011 edition as an Artist 2 Watch (A2W) . Be 'shore' to check out the interview, "LIKE" The ShoreShot Music Page on FB, and Follow @ ShoreShot and @ShoreTourGroup on Twitter!

Enjoing music and videos from ShoreShot... cool. Drop them a few dollars for support below.