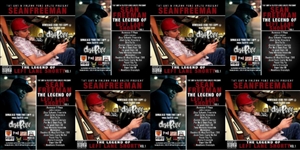 TNT ENTL.O.E. SQUAD4043687343Sean "Mars" Freeman is an Atlanta based hip hop artist originally from Springfield, Massachusetts By way of Columbus Ohio. He is known for his unorthodox ability to articulate and convert simple messages into a complex an... Read More

TNT ENTL.O.E. SQUAD4043687343Sean "Mars" Freeman is an Atlanta based hip hop artist originally from Springfield, Massachusetts By way of Columbus Ohio. He is known for his unorthodox ability to articulate and convert simple messages into a complex and vivid painting through a laid back smooth unheard of delivery. The influence of traditional East Coast Hip-Hop is evident as you listen to Sean but his Midwest accent and Southern Hooks give him something that most MC\s don\t have naturally, which is, quite simply, a unique sound. Sean moved to Atlanta from Columbus, Ohio over 5 years ago and has been grinding in the streets ever since. Performing at every possible place he could and even Ghost writing for a couple of established Indy Labels in the city trying to find his way in the game. As an established MC Sean learned how to write without using a pen and or paper its actually all in his head. You give him a beat and about 5-10 minutes and you will have a hot 16 give him a few hours you will have a hit song. Some rappers are great at writing a verse or a hook or both but still dont have what it takes to put together a good song. Sean understands that his songs should be visual so he takes this approach to songwriting and makes not only hot versus but hot songs! Sean recently dropped his 2nd mix-tape "The Legend of Left Lane Shorty Vol.1" on datpiff.com. The single on the mixtape is called "Shit to Do" The video for "Shit to Do" will be shot August the 12th here in the "A". Sean already has three videos on youtube with over 100,000 total page views to his credit. The videos\s are "Put on a Show", "John Lennon" (Beatle status), and "Zoom". Sean was featured on the cover of makin it magazine a few months ago. The mix-tape can be downloaded free at http://www.datpiff.com/Sean-Freeman-The-Legend-Of-Left-Lane-Shorty-mixtape.338230.html.

Enjoing music and videos from SeanFreeman... cool. Drop them a few dollars for support below.