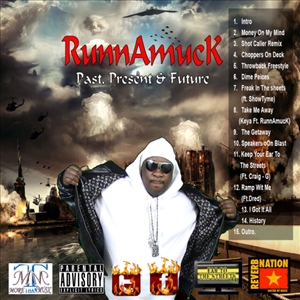 What's up guys? My name is RunnAmucK, and I'm originally from Brooklyn N.Y. I now reside in Syracuse N.Y. and I'm into all kinds of music. My specialty though, is hip-hop/R&B and alittle bit of Reggae. I've been writing for as long as I can remember ... Read More

What's up guys? My name is RunnAmucK, and I'm originally from Brooklyn N.Y. I now reside in Syracuse N.Y. and I'm into all kinds of music. My specialty though, is hip-hop/R&B and alittle bit of Reggae. I've been writing for as long as I can remember (about 7yrs old) and I can say that I'm happy to have been born in the earle 70's at the inception of hip-hop, so I have a strong foundation in the genre. I have my own studio/cd store (More Than Music 315 N. crouse ave Syracuse, N.Y.13203) where I produce and sell my own products as well as other artists and popular djs. Not only do I rap, But I also enineer, produce and host various venuse earning me the title of M.C. I started out on the radio, at Syracuse university with an underground radio show called "Ear To The Streets" which lasted about five years and has won numerous "Upper State Independent Awards" and even expanded to a new video show dedicated to unsighned artists called "EAR TO THE STREETS TV" which also has numerous awards under it's belt. Wile my radio show was cancelled, I immediately got picked up by Syracusehiphop.com which gave me a shot at a whole new audience, The world! So now you can catch me spinning independent artists from all over the world every monday night, from 8-9:30pm. My show is called "EAR TO THE STREETS RAW" and it's raw and uncensored (which the radio couldn't do) on Syracusehiphop.com. so if anyone is interested, you can send me your tracks, and if they're hot, we'll rock them for you. This is an opportunity I've made especially for independent artists . You can hit me at eartothestreets315@gmail.com for entries and more info. As I stated earlier, My tv show is now playing in 3 counties in upstate N.Y. Recently, we got picked up in Brooklyn and Manhattan N.Y. and we are in talks to get aired in Queens by the fall. so if anybody is interested in getting promotion in any of those markets, get at me! I'm also up for collaborations with other artists as well as cross-promotion so like I said...GET AT ME!

Enjoing music and videos from RunnAmucK... cool. Drop them a few dollars for support below.