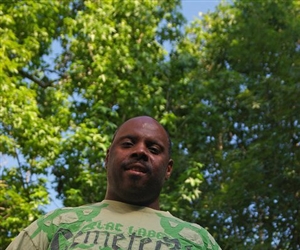 Born and raised in a small town of Winterville, North Carolina Ronnie Run is a well-known rapper with a lot of streets credit. &ldquo;I want to put North Carolina on the map and show people that there is talent around the state.&rdquo; Growing up aro... Read More

Keep up with Axe Gang Entertainment and our movement. Founded in 2008 and established in 2010 Axe Gang Ent is quickly becoming a well-known music group throughout Ohio and parts of the Midwest. We are always ready and willing to network with anyone t...

Born and raised in a small town of Winterville, North Carolina Ronnie Run is a well-known rapper with a lot of streets credit. “I want to put North Carolina on the map and show people that there is talent around the state.” Growing up around the Pitt County area was just plain and real for Ronnie. “Where I’m from was nothing different from your New York or LA. Living in the South; the pace is slow and the hard work is there.” Starting out as a DJ; Ronnie knew or thought this was something he wanted to do. “After the Dj thing fell through; “I had a backup plan and it was rapping.” Ronnie’s influences are God, my daughter Jocelyn, my family, The Sugar Hill Gang, Grandmaster Flash and the Furious Five, 2Pac, Notorious BIG, Rakim, Ice Cube, Dr. Dre, KRS-One, LL Cool J, Run DMC, Beastie Boys, Jay-Z and the list goes on and on. “I remember the first time I heard “Rapper’s Delight” by the Sugar Hill Gang and I knew from that point; rapping was something I wanted to do.” It was during a school test when Ronnie wrote his 1st rap song. After that I called my cousin Big Buji and he told me that he was putting beats together so we got in the studio and did my first EP "Lyrical Masta;" it became a street classic. Two of those songs hit the radio airwaves "Ghetto Stress FT. Black Chyna” and “North Kack for Real.” With the success of these songs, I thought it was time for me to try a new producer. I kept writing and one day while listening to a mix tape I called the producer off the CD, and the rest is history. ” I called the producer from Sick Man Productions, we talked and within two weeks I was recording my first song;”Back 4 Tha’ Third Time”. The title track, “4 tha’ Club,” debuted on the radio and quickly caught buzz around town as well as in other states outside of North Carolina. After the song appeared on the radio; Ronnie thought it would be a good idea to shoot a video for the song. “I got with my homeboy John RoRech and we ask Shawn (the owner of Club Dynasty) if it was ok to shoot the video there and he said it was cool.” About two months later I submitted the video to BET late night show “Uncut” and within a week the video was being shown before a nationwide audience. “I thought it was a blessing and an honor to be seen and heard on a level like that.” Soon after that; Ronnie thought it was time to hit the studio again and keep the street flooded with some more hits. “I had to build up my fan base so that when I dropped the sampler CD “Cleanin’ Houze”; the fans would love what they heard. ” There was one joint the fans and the DJ’s were feeling and that was “Bump Dis’ (Carolina Ridin’). “I thought it was time to show the world how the Carolinas get down and let them know what we were all about.” Ronnie Run has drop his debut album called “Soulful Rush” with two tracks making noise as we speak. You can’t go wrong with “I Remember,” and Street Legendz" ft. Big Hop which is making some crazy noise as we speak! Ronnie is continuing to network and recording, waiting to get a break. “I am bringing a whole lot to the table as a artist and I am willing to give 200% if needed” RONNIE RUN, aka Winterville?s Finest PO Box 252, Winterville, NC 28590 252-756-0085 or 252-933-3978

Was signed to a independent record company out of Arizona (Deka Records) I just won the contest on boomdizzle.com (LL Cool J 's site)

Enjoing music and videos from Ronnie Run... cool. Drop them a few dollars for support below.