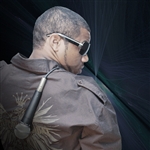 Henry Knight IV known as Quotez the Ariez was born in Ohio on March 27,1989. Quotez was introduced to the world at an early age, listening to the greats of r&b such as Maxwell, Gerald Levert, Keith Sweat, and more. &ldquo; I use to always listen to t... Read More

Chili-Bo is the CEO of Drink-A-Lot Records and one of Ghetto musics most “Unsung” talents! A Super Producer, Rapper, Turntable Trickster! (Dee Jay), Musician, Hustler & a mean “Hook/Chorus” singer! Chili-Bo has been on the underground music scene for...

Im a girl who is passionate about all sorts of music. I make beats as a hobby. I also am launching a blog. If you want album reviews or an article, let me know.

Henry Knight IV known as Quotez the Ariez was born in Ohio on March 27,1989. Quotez was introduced to the world at an early age, listening to the greats of r&b such as Maxwell, Gerald Levert, Keith Sweat, and more. “ I use to always listen to these cats when I was on the phone with a girl, but I never thought that one day I would be trying to grow into their shoes. I just knew it made the talks a lot smoother with the ladies lol,” says Quotez. After asking the Ariez what made him venture into music, he stated, “ I simply got tired of dream big and wanted to live big. Everyone has their ways of getting to the top of a mountain, I just found that my climb was in music. After going through so many stressful situations ( Mom’s sickness, being doubted, and living in poverty), you start to find ways out and when one door opened, I felt it was up to keep it that way” It wasn’t until the fall of 2008 that Quotez began pursuing a music career, starting first in the gospel and conscious hip-hop, and then into other forms of hip-hop. Right now Quotez states that he’s in the process of growing more in music and learning how to manipulate the business in his favor. In fall of this year, his first debut album “ Rize of an Ariez.” “Man, this album is definitely gone hit hard. My focus was to show how versatile I can be and to open up a lot of these closed doors around me. I definitely see this album pushing me to the next level,” says the young upcoming artist. In the future, this inspiring artist hopes to create not only his own form of hip-hop but also his own band. He says he wants his music to reach and touch a heart in everyone. “My goal is to bring creativity and lyricism back to the forefront of music. I want to make sure that before the government becomes known for killing our radio stations, that it’s known for killing good music. It’s more to hip-hop than drugs, guns, and constant violence.”

Enjoing music and videos from QuoteztheAriez... cool. Drop them a few dollars for support below.