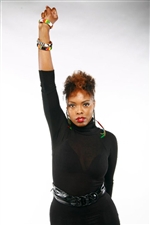 A Creative Soul in Music, Art, Fashion and so much more.... .. Born Tamara Lytch named after Tamara Dobson who played the 1970's Cleopatra Jones. By right is was only natural to choose her stage name as Cleo Jones. With great similarities, Cleo Jone... Read More

Ghost was born and raised in Cincinnati, Ohio. His music career started in 2000 as co-founder and legal liaison for 3 Street Records. At a brief run at developing artists, Ghost decided to continue his passion for music toward another avenue, the Ohi...

A Creative Soul in Music, Art, Fashion and so much more....

.. Born Tamara Lytch named after Tamara Dobson who played the 1970's Cleopatra Jones. By right is was only natural to choose her stage name as Cleo Jones. With great similarities, Cleo Jones is a strong representation of a dominate black female fighting against all odds and discrimination of women in the entertainment industry. Cleo Jones career began in 2001 as a powerful lyricist, a female emcee mentored by Chuck D of Public Enemy. She joined Chuck D in putting together an all female mc group currently known as Crew Grrl Order under the SLAMJAMZ Record Label. She has shared the stage with legends such as MC Lyte, KRS-One, ICE T, Public Enemy, Kool Herc and many many more. Cleo Jones has toured venues all across the U.S. to include major events such as Women Who Jam, Hopscotch Festival, Go Green Festival and The Women of Hip Hop Awards. In the midst of it all, she managed to find time to work with many groups and camps to build up her lyrical delivery. Later she was joined by producer MaddBlackMan to birth her first solo project “Freedom” which has reached into areas such as Russia, United Kingdom, South Africa, France and Australia. Cleo Jones has become a house hold name. Her voice remarkable, her strength endless and her lyrics very touching. Inspired by main stream acts such as Diana Ross, Lauryn Hill, Bahamadia and many more. Now, near the completion of her 2nd solo project to be released early 2011, she knows the time has come for positive, uplifting and empowerment music be recognized by many.

Enjoing music and videos from Queen Cleopatra... cool. Drop them a few dollars for support below.