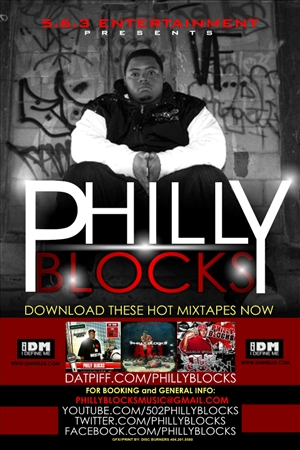 Philly Blocks was born as Juancinto Neal September 10, 1988 in Louisville, KY. However he had relatives on the east coast in Pennsylvania, he would visit there often and became engulfed in the Philadelphia hip hop scene; he was attracted to their wor... Read More

Ortega The Omega was born March 1988. Raised in South Central Los Angeles. The city where things happen based on the decisions you make. As a little kid, he would listen to his homeboy’s uncle play “West Coast Gangsta Rap” in his DJ system. When he w...

Philly Blocks was born as Juancinto Neal September 10, 1988 in Louisville, KY. However he had relatives on the east coast in Pennsylvania, he would visit there often and became engulfed in the Philadelphia hip hop scene; he was attracted to their wordplay and delivery. "I've always had an east coast delivery and being heavily influenced by many east coast rappers. I chose Philly as my surname." As for Blocks it stems from a brief stint in the streets as a youth, hence the name Philly Blocks! At the age of 4 Philly was exposed to hip hop with his eyes, the first music video he saw was Bones Thugs-N-Harmony's "Thuggish Ruggish Bone". From that day forward he fell in love with Hip Hop. Blocks from the age 13-17 was more focused on being a King Pin compared to being a King of the Pen so by the age of 17 he found himself facing a weapons possession charge in March of 2006. After the legal drama Philly decided to take his passion, hustle, and street smarts to the studio. Taking his music to the next level in February 2009, he dropped his first mixtape "Marlo Stanfield: The Crown" hosted by DJ Thru Da Roof. This spawned several great reviews and even landed him gigs at several venues around the city of Louisville such as Tailgaters, JT’s, and Icebreakers, the American Legion, and sports bars around the area. With creative marketing Blocks found himself performing on the east coast in cities like New York and Cleveland, OH With his second mixtape circulating the streets "Live From the West End" is hosted by two of Kentucky's most prominent Dj's, DJ Empty Beats and DJ Tae Philly droped his third mixtape called Ali The Mixtape hosted by DJ Marlei Mar and took it on the road down south to Houston, TX were the people of the south loved the Kentucky born artist and is the perfect warm up for what Philly's indie label L.O.E believes will be a catapulting force for himself and the state of Kentucky Due February 2012 a street album "L.O.E (Loyalty Over Everything)" Philly is gearing up to take over the music scene in his home town and subsequently the country! Philly is quoted saying "I will not rest until the name Philly Blocks is as common as Jay-Z" For bookings and more information contact manager Darnell Johnson at 502-407-0266 or phillyblocksmusic@gmail.com

Enjoing music and videos from PHILLY BLOCKS... cool. Drop them a few dollars for support below.