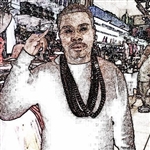 Sam Riley The Prodigy. First Off I want to thank my Prime Creator and my Creator God and Goddess Heru and Sekhmet who helped made this earth and my mother and father who is given me the truth, the knowledge and the passion of life and for my music wh...

Welcome to my Indie by Choice Profile... I am a dope MC on a mission to change thenorm of Hip Hop as you know. I live, eat and breathe music!!! Desire 2 Inspire is my slogan!! For Booking/Collabs Contact: WhoIsKeshaB@gmail.com (Official Bio Coming...

I am a young artist born in Berkely, Ca just trying to do it big for the family that includes close friends. I currently reside in Sacramento, CA and have a group called D.R.E.A.M Music. This group Includes Deuce, Roddie Scott, and Jackson.

M-RrrrrProducer/Engineer/SongWriter/DrummerBorn: May 12th 1980sBirth Place: Chester, PAMusic Producer M-Rrrrr got his start in 2004 with engineering and producing for local indie label Sanai Records. His skills opened up doors for him to be given a l...

Born to the world as Paul Livingston of Harlem, New York, this young aspiring artist slowly developed a strong passion for music at the age of 13 which soon led to the birth of the amazing Paul Blaze. Inspired by legends and majors in the game today such as: Tupac , Biggie Smalls, Jay-z, Nas, Snoop Dogg, 50 Cent, Eazy E, Eminem, Ice Cube, Big Pun, Big L, DMX, and other all time greats... Paul Blaze began to create his own style and flow of music which caught the ears of many listeners by the young age of 16 when he performed at Harlem Hospital promoting sexual awareness. His talent and dedication only grew from there as he went on to perform dozens of other showcases with his former group AF1. Now a member of the team INSOMNIACS.NS Paul Blaze has created over ten tracks in his lifetime, some recorded and others still in the making of becoming yet another masterpiece as he strives to give his crowd nothing but perfection and 110% of himself. This attitude keeps him going and his crowd screaming for more as he has shown time and time again at various performances. Paul Blaze and other members of his team have closed out shows with hit records that left competition speechless and the crowd roaring. Paul has recently performed in places such as City College "Element of Style Fashion Show" where he closed the show for Ron Browz, Times Square Art Center for Rock Me TV, and many others to come, each showcase ending with a positive result. Awaiting his time in the spotlight Paul Blaze aspires to be the next big hip hop artist. Proven to have the ability to do so.. He tells his fans, interviewers, & friends the same thing when asked about himself. He is Paul Blaze and music is his passion...

Enjoing music and videos from Paul Blaze ... cool. Drop them a few dollars for support below.