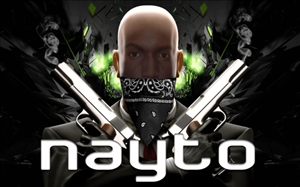 Nayto is a hip hop artist from Nairobi Kenya with a mission to make a great career in the music industry and making great music, so as to get more people to listening and liking his music as he introduces a new kind of music everybody will love to he... Read More

Do you believe in Santa? What about elves? Everybody's gotta believe in something and Robby The Elf reminds us to recognize. Born half elf on his mama's side and raised in an elf colony, now Robby is a rare elf living among people. Robby The Elf is ...

Cool Ass Cris! 1/2 of the Group T.M.F! (aka) Tha Muthafuckaz! Started off in the Mid 90s with Platinum Group Digital Underground where he learned his music & business skills working with artist such as Shock G, Money B, 2 pac, The Luniz an many other...

Nayto is a hip hop artist from Nairobi Kenya with a mission to make a great career in the music industry and making great music, so as to get more people to listening and liking his music as he introduces a new kind of music everybody will love to hear.

Natyo started his music career at a very young age when he had people rapping and playing with word to entertain, and from there on became his passion and wanted to do that also and so that’s when a star was born.

Starting off as any aspiring artist would do, Nayto would find ways in which to record that very first song and let friends hear it and be excited that people like what they’re hearing. And as time went by Nayto would do a song after another as the rapping skills got more sharpened.

Nayto’s first song was recorded in his house with only a computer and a headphone microphone and not a studio microphone, and the very first song was called “real hip hop” and that’s where everything started.

Seeing he had talent, Nayto hustled for some money to record his first studio song which he named “choppa” as the way he was chopping words, and from there on Nayto has been releasing hit after hit with songs like: “straight to the point”, “money run the world”, “I miss you”, “paper chase”, “live your life” even doing freestyles in the studio and recording them and also going to rap battles and winning most of the money.

Nayto has a great future ahead of him and has no sign of stopping making hits any time soon.

Enjoing music and videos from nayto... cool. Drop them a few dollars for support below.