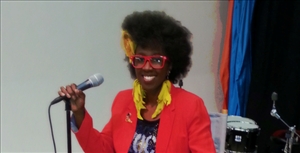 The name Mahoganee by definition means rich in strength and that is what Mahoganee strives for as an Artist.

Although Mahoganee has been singing all her life, the journey to recording her first album did not come to pass until 2005 after the death of her mother "Dorothy N. Mivens-Rivers" who was found by her eldest brother in bed looking as if she was asleep.

Mahoganee released her first independent album "My Life, My Story" under the independent production company "Beat Huztlerz Productionz" in 2006 after deciding to take a different road on what type of music she wanted to leave as a legacy and dedicated a song to her mother entitled "I Miss Her". Although this was her first album, her musical journey began long before this. Growing up in a household with her own musical icons, her mother, father and siblings, started her lifelong passion of singing, writing and performing. She calls the stage "her home" and says "music is in her soul."

Being born and raised in the small historical of Summerton, South Carolina has always kept Mahoganee grounded and has been inspirational in her musical endeavors. As an adult, Mahoganee was drawn to the beautiful city of (Seaport) Savannah, Georgia. This nurturing environment became Mahoganee's second home where she quickly began singing and traveling with local bands, appearing locally in annual festivals and art shows. Opening for Artists such as Glenn Jones, Tony Terry, Cherelle, Keisha Jackson (daughter of Millie Jackson), Michael Speaks, Michael Sterling, Mary Davis & the SOS Band. Welcoming her growth she moved to Atlanta, Georgia. Local bands and the popular social hotspots embraced Mahoganee with love. This guided Mahoganee to perform live on the "Tom Joyner Skyy Show". Atlanta's inspiration gave Mahoganee the humbling experience of working closely with AIDS Activist and Motivational Speaker, Denise Stokes. This project became the song "Good Luck" on the spoken word album entitled "Elevation". She was also given the opportunity to perform on the album "Fierce, Badd & Dangerous" with spoken word artist Queen. Still receiving love from Atlanta, Mahoganee collaborated with Christopher Alan Yates and her background vocals were recorded on the album entitled "Mint Condition".

Mahoganee has now relocated to Washington, DC. In the US capital she is a regular at its local artist venues, performing regularly and is putting together her second album entitled "Thoughtz of a D.I.V.A.".

Mahoganee has started her own company "DivaMilitia, LLC. (DM) which provides a variety of positive outlets through Music & the Arts for women & girls to know and feel that they can achieve anything. To have a dream and make that dream a reality is what DivaMilitia is all about. To be a D.I.V.A. in our Militant terms is to be Determined, Innovative, Vital & Aspiring. Through music, poetry & other organizations that have partnered with DM, our dream is being lived every moment of every day. We are a catalyst to making positive music and positive impacts in the lives of women and girls all around the world. We supply empowering workshops geared at raising self-esteem & self love and also love of each other. We teach about having the entrepreneurial spirit and knowing that you have a dream inside that you cannot ignore and must pursue in a very divamilitant way. Our goal is to encourage positivity, change, strength and courage to do & be, all that you can and then some in a very divamilitia kind of way.

When asking Mahoganee about the impact of her sound and the music industry, Mahoganee expresses these provoking thoughts. She says "I am a part of a movement that will change people... it is music to help not hurt. "She continues this thought by stating, "Music and words heal in an indescribable way and being a part of this means my life truly has a purpose. I am a part of a worldwide community that is taking us into the future to heal the world of pain. My voice is a vehicle for this. Mahoganee concludes saying "I sleep well at night knowing that I am a part of something worth living for". Look for Mahoganee in Washington, DC and surrounding areas performing for local venues & coming to a state or country near you.

Jack B. Johnson, County Executive for Prince George's County, Maryland recognized & proclaimed the 16th of February, 2008 as a day of celebration and recognition of Mahoganee's musical accomplishments and her new upcoming album.

Album "My Life, My Story" Available at:

My Statement: I am A DIVA, that has something wonderful & profound to say to the world, so I offer myself up through my music. I use the term DIVA as an acronym for being Determined, Innovative, Vital & Aspiring. So be a DIVA & Be militant about it!!!

Revenge of The SMART Chicks

Enjoing music and videos from Mahoganee... cool. Drop them a few dollars for support below.