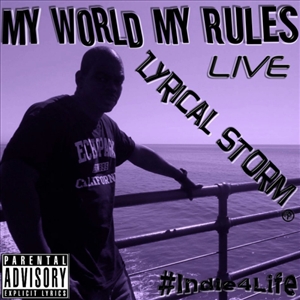 There are several genres of music, and Lyrical Storm is focused on making the art of spoken word a force within the music industry. Writing for over 12 years, Storm first began his practice of writing spoken word in middle school through love poetry.... Read More

There are several genres of music, and Lyrical Storm is focused on making the art of spoken word a force within the music industry. Writing for over 12 years, Storm first began his practice of writing spoken word in middle school through love poetry. He would later become a member of the local Fort Wayne, Indiana group known as the Black Italians after his Sophomore year in high school. Working with many local artist in the B.I. Attic became an essential step of balancing Storm's creativity of his spoken word style, basically his love poetry and prose to his freestyle and written flows. Storm went to Indianapolis, IN to study marketing in college after being a member of B.I. for three years. Still performing his spoken word material on campuses and around Nap-town's poetic venue his plan was to write a poetry book to help pay for his tuition while attending a private college. Due to financial fall backs Storm was forced to postpone the yearly planned volume release of the Uncharted Vaults series while relocating and reestablishing himself. Moving to Cincinnati became great success for Lyrical Storm, as he turned his focus toward his first Hip Hop LP The Box Theory. Lyrical Storm has performed around many Hip-Hop clubs and was apart of the City of Dreamz showcase hosted by Jive Records and Bystorm entertainment. Lyrical Storm is currently working on several projects that are in the process of being complete. Upcoming publishings, music releases, playwrights, video game concepts, and etc are just a few of those ventures. Within the music industry there are several genres of music, and Lyrical Storm is focused seemly a poetic spoken word force.

Enjoing music and videos from LyricalStorm... cool. Drop them a few dollars for support below.