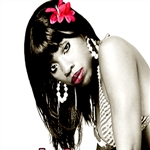 Lady Femmefatal, born Shiminga Niyumka Forney is a female rapper, model, and aspiring actress born April 17, 1984, and raised predominantly in Detroit, Michigan east 7 mile area. She spent one year in Denver, Colorado, moved back to Detroit, and later to Harperwoods, Mi where she finished her junior and senior years of high school. She attended some college courses at Macomb Community College towards Crime Lab Technician, and studied a little French there as well, She love languages and is currently learning to speak Spanish, Mandarin Chinese, and soon Japanese. Lady Femmefatal is diverse and versatile when it comes to her song writing, although she specializes in Hard Core rap. Lady Femmefatal says Hard Core rap is what she grew up on, it's all she knows, but she has no problem switching it up, as she has proven on several tracks. Fatal has been writing and rapping since about 11 years old, and says she owe's that to her step-brother David Gogins, or Raw Num. He pretty much introduced her to the idea of rapping! Not only rapping but the idea of being an artist. She used to rap and write with him upon request when they were younger, Fatal saw his passion for it and what rapping was about all through him! She always loved writing poems and stories as a youngster, but he helped to take that to the next level. Femmefatal never in a million years thought it would be something that would develop into a true passion, and she never thought she would perform in front of an audience, and record in a studio either because Fatal always considered herself shy, but she did despite that! Her passion and understanding for the art of rapping, and music in general grew from watching and learning from him, after he moved away, he encouraged her to keep writing and to begin producing tracks, and behold Lady Femmefatal! Though she had been writing for a while, in 2006 she finally got enough guts to go to the studio and start layin tracks. Femmefatal first saw the name Femme Fatale in the dictionary when she was like 13 years old! Instantly she knew it was the name for her! Fatal says her rap name is the best way to describe her as an artist and person! The first half Femme is the feminine, fresh, loveable, sexy, and classy side of me. Fatal stresses that she's always a LADY no matter what, rap will never change that! The second half of her name describes the hood, hardcore, outspoken, mean, and real side of her and her music. Put those two together and you got the classiest, sexiest, realest female rapper all in one nice little package!! Fatal wants an audience that can handle versatility and realness, and do without labels, when someone ask, hey whats Femmefatals style? she want's the response to be, she does it all! Her ultimate goal is to be so diverse, different, and multi-talented so much so that she cant be fit into one category or box! I dont want to be labeled as only hardcore, or sex kitten, or hip hop, I should be known as all of the above and more!, says Fatal. Lady Femmefatal has done shows in many local bars in suburban and local Detroit areas! In addition to her music, she loves modeling too, and hope to someday be in respectable known Magazines and fashion shows across the world, as well as own her own clothing line! Besides music and modeling, she finds herself interested in acting too, and has been submitting to casting calls and auditioning for roles to get her acting career started! Fatal says, Getting money is my only option, and I must say I have it in my blood naturally to get it in and take over, as I am the niece of well known Detroit drug lords known as THE CHAMBERS BROTHERS, or the The Chambers Gang. Although she's not proud of how they came to fame, she say's its that get money attitude that got them to see millions, and in a completely opposite way, Fatal hopes to do the same some day! Fatal want's to leave you with this! "Needless to say, I wont be stopping no time soon, I am a go getter, with the support of my friends, family, and haters, I am not going to be satisfied or happy until something like the whole world knows my name! Lady Femmefatal, that Chambers Girl! "

UPDATE:: TWO MEMBERS OF THE CHAMBERS GANG ARE CURRENTLY RELEASED, AND YOU CAN EXPECT EXCLUSIVE INTERVIEWS COVERED BY THERE VERY OWN LADY FEMMEFATAL..STAY TUNED AS I HAVE AN UPCOMING PROJECT WITH THE MOST RECENTLY RELEASED CHAMBERS BROTHER BILLY JOE CHAMBERS.

Enjoing music and videos from LADY FEMMEFATAL... cool. Drop them a few dollars for support below.