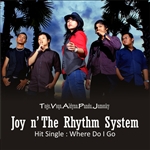 Life is more than just a coincidence. Perhaps that sentence is the appropriate expression for this band. Yes, starting from the introduction to the forming, the undertaken process is more than a coincidence. Starting from Audiolab Community, a community of people and institutions who had worked with the Pimpy "Mr.. Pee" Pangestoe’s recording company, Audiolab', they were brought together by Mr. Pee, although they were having their own projects at Audiolab. Aldyna (vocals) who at that time was finishing his solo album, Pandu (guitar), Tego (guitar), and Jamesky (bass) were completing their band album, and Veqa (drums), is also studying about recording at Audiolab.

Looking at these potentials, Mr. Pee took initiative to unite them in a regular workshop. The workshop aims to explore their potential and suppress their ego as musicians. Also to prepare Aldyna’s solo album promo tour in Malaysia. Long practice, not only preparing for the tour, on the sidelines of the preparation they also created several songs until decided to form a new project. So, in November 2009, this project officially took place and was committed to training hard, discipline, and professionals in the realization of the project. Even so, they continue to show their professionalism to support the project and Aldyna’s digital solo album.

With the difference of musicality of each personnel, it provides a unique characteristic of the music band, named Joy n 'The Rhythm System, the. However, they have one common goal, namely to prove others by making music and inspire those who listen to their music.

Enjoing music and videos from Joy n the Rhythm System... cool. Drop them a few dollars for support below.