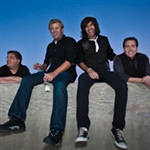 The music of the John Orr Franklin Band is a mix of progressive and album oriented rock with a broad range of styles and influences. The band is currently supporting two all original CD&rsquo;s released by John Orr Franklin, entitled Pathways (releas... Read More

Hello my name is Kristen and I am a singer songwriter from Colorado. My music is about empowering and uplifting people. I am an abuse survivor, and I wrote many of my songs about the abuse I endured and also my struggles with being adopted. Now that ...

We're glad you found us...however it is you found us! Members: Michelle, Rob, Mike, Andrew We're from Long Island NY. We found each other on Craigslist and completed our current line up April 2011. Check out our recordings of Momentum, Different D...

The music of the John Orr Franklin Band is a mix of progressive and album oriented rock with a broad range of styles and influences. The band is currently supporting two all original CD’s released by John Orr Franklin, entitled Pathways (released 2007) and Transformation (released 2009). The CD’s were written and recorded in John’s personal studio in Austin, Texas and released on his own independent record label Blue Room Digital. The Transformation CD has received glowing reviews around the world, Benoît Ancenay of Metal Integral Webzine in France says, “Transformation has the softness and reflections of silk, the luster of gold, and the charm of music that goes straight to the heart. Nothing less!”

Utilizing the two releases to find likeminded musicians, John has brought together a group of musicians that, when assembled, have the true spirit of a band with a single unified goal. Formed in 2009 the band may just be getting started but each member brings to the table years of experience playing music at all levels of the industry

John was born and raised in Tennessee, which had a strong influence on John as a musician. At the age of five he realized, thanks to the band Kiss, that he wanted to play guitar and by fourteen he bought his first electric guitar. Within a year of taking private lessons; he was playing rhythm guitar in his instructors’ band. Later on he lived in Memphis and Nashville, which was extremely influential in shaping him as a songwriter because of the variety of music he was exposed to. In Nashville, he participated in many songwriter events which were interesting since he was the only writer in the room not writing a country song. In Memphis, it was all about the blues which is where John had his first taste of regular work as a musician. “Playing in an all blues band on Beale Street had a profound effect on me musically; the blues is at the heart of everything I do as a lead guitarist to this day.” Besides private guitar lessons John studied In the Record Industry Management Program at Middle Tennessee State University and the Commercial Music Program at the University of Memphis. Inspired by his interest in recording he realized early on the potential of recording on a computer and he worked in technical support to get his chops up on computer maintenance and internet theory. John spent many hours in his home studio developing his sound and once he felt proud of the results, he began the process of learning how to start his own publishing company and record label, Blue Room Digital. John has always been in the mode of “do it yourself” and though he says “It’s a bit overwhelming at times; he gets to release music that stays true to his original vision.”

The lineup of the John Orr Franklin Band features Rob Palladino on Drums, Ryan Redfern on Bass Guitar, Christopher Cribb on Keyboards and John Orr Franklin rounding out the group on Vocals and Guitars. The group staged their first show this past October in Austin Texas at the Long Center for the Performing Arts, Rollins Studio theatre. The show has materialized into a beautiful marriage of live music and projected videos that are synchronized to the performance adding an incredible visual aspect to the bands performance. The John Orr Franklin band has put together a show that is helping to ferment the group within the echelons of modern day rock and roll theatre.

Enjoing music and videos from johnorrfranklin... cool. Drop them a few dollars for support below.