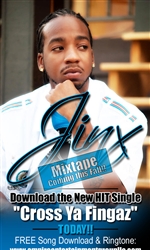 Jackie Jackson (born August 10, 1984) is an American rapper better known by his stage name Jinx. He was raised by his mother in Downtown Cincinnati, Ohio. Jackson is a 2003 graduate of Taft High School located in Cincinnati, Ohio. Faced with the te... Read More

Jackie Jackson (born August 10, 1984) is an American rapper better known by his stage name Jinx. He was raised by his mother in Downtown Cincinnati, Ohio. Jackson is a 2003 graduate of Taft High School located in Cincinnati, Ohio.

Faced with the temptation of adjusting to the streets and overcoming adversities such as homelessness, and being shot, Jinx began to realize that he had a true purpose in life.

Jinx first started singing at an early age, but his interest in rap began at the age of 16. Jinx began free styling and competing in several rap battles including at the 2009 Ohio Hip Hop Awards.

In 2003, Jinx became affiliated with Dezert Dogz Ent and held an executive position as the President. Most recently Jinx started his own label, and is CEO of Empire Entertainment Group LLC.

Jinx is currently working on his solo mix tape “Cross Ya Fingaz” which will include debut singles “Pick Em Up, Shake Em Up” “Twinkle”, and “Stay Strapped”.

Jinx is inspired by many of the industry’s top artists such as Run DMC, Drake, Cameo, Stevie Wonder, Michael Jackson, Naughty by Nature, Take 6 and many more. Although he has a style of his own, Jinx lyrical style has often been compared to the likes of Ludacris and Malcolm X.

On a personal level, Jinx favorite color is black, and his favorite food is lasagna. In his spare time, Jinx enjoys spending time with his children, shopping, and traveling.

To schedule an interview, or for booking please contact Jinx at: jayspade03@gmail.com

Enjoing music and videos from Jinx... cool. Drop them a few dollars for support below.