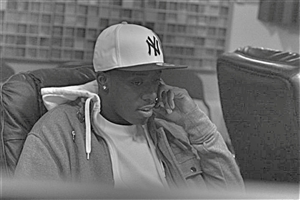 Ju'shay is a talented female artist born and raised on the south side of Chicago. Influential with her lyrics, Ju'shay inspires many with her artistic flows through the Iconic genre known as Hip Hop. she is also a powerful song writer that has the ta...

Music equals movement; a simple phrase that expresses more than what meets the eye. This phrase seeks to portray a lifestyle; one that doesn’t stop at good enough, one that doesn’t stop in the midst of heartache, trials, and tribulation, and one that doesn’t count failures but is always looking ahead to the future. This is the phrase and lifestyle that defines the new and upcoming hip-hop artist, Jay aRe. Jay aRe, also known as Joe Redmond, was born on February 28th 1990 in Chicago, Illinois. After five years of living in the windy city, the Redmond’s decided to move to Aurora, IL in hopes of bettering their life as a family. As a child, Jay aRe was always intrigued with music and took great interest in Michael Jackson’s “BAD” album. It was the album of choice for years whenever the family would travel back and forth to Chicago to visit relatives. At the age of 7, Jay aRe picked up piano and started to gain an understanding of time, rhythm, and theory. This eventually led to his involvement in the local church choir where he began to sing. It wasn’t until his Junior year at Aurora high school that Jay aRe found his love for hip-hop and rap. Long time good friend ,“Lewie XIII” challenged Jay aRe to a freestyle competition after school one afternoon and from that point on, he knew he had found his niche. Over the next few years Jay aRe began to write day to day, experimenting with different beats and sounds, and listening to any and all types of music- submersing himself in the genre. One of the first influential groups in Jay aRe’s understanding of the music industry and hip-hop was WARREN & Wesley. Their love for music as a craft changed the way Jay aRe listened to and analyzed hip-hop and rap. Other influences include Jay-Z, Michael Jackson, The Jackson 5, Kanye West, Chris Brown, and Drake. Through listening to an assortment of styles of music as well as hip-hop, Jay aRe found his home in the rap game. Seeking to connect with his audience and fans, he has made it a point to use his experiences, stories, and faith as fuel for inspiration and creativity. In 2009, Jay aRe released his first mixtape, “Re-Applied” that established him as a new hip-hop artist with his local hometown and campus. He then spent some time co-producing and appearing on WARREN & Wesley’s second studio album, “Reaching Fallen Arms.” From there he took his newest material and released his second mixtape, “How Far We’ve Come” in 2010 that garnered even more attention from the Chicagoland area. “How Far We’ve Come” was a stepping stone in Jay aRe’s career. Rooted in the talent and truth, the mixtape gave audiences and fans a deeper look into the struggles Jay aRe faced when trying to make his newfound dream a reality. On October 8th, 2011 Jay aRe released his first and highly anticipated full-length album, “The STORM Before The Calm.” The album gained widespread respect and became a popular hit among the Chicago and Aurora areas as well as Jay aRe’s local campus. The “STORM Before The Calm” is a story album that ties the struggles of creating a name in the music industry, along with the triumphs that have come out of essentially nothing. Throughout the years, Jay aRe has worked with many talented artists and singer-songwriters: Rich Ndembe, “Lewie XIII,” Mackenzi Jo, Shaina Williams, Lauren Finders, and many more. Looking to the future, Jay aRe is set to release his next album in the fall of 2012. “The Mirror Room” will be his most technical and comprehensive release to date. The potential for this young artist is high. His music pulls at the emotional strings differently than other hip-hop acts; rather than just words over a "cool" beat, he aims to tell stories that directly impact his enthusiasts. He compels them to take a deeper look into what he is about, in hopes that they will walk alongside him and experience life together. So with that said there is just one question, will you join the movement? Years of preparation, hard work, determination, and a little luck have come down to this very moment. He’s ready. The question is….. aRe you?

Enjoing music and videos from jayare... cool. Drop them a few dollars for support below.