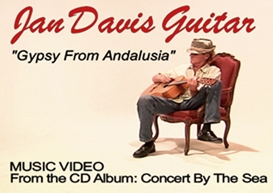 Bio - Jan Davis Guitar It was his ability to arrange and write music that landed Davis a gig with the popular B. Bumble & the Stingers, a group of studio musicians who released albums of classical pieces in a rock & roll style. Davis, Bob Roberts an... Read More

It was his ability to arrange and write music that landed Davis a gig with the popular B. Bumble & the Stingers, a group of studio musicians who released albums of classical pieces in a rock & roll style. Davis, Bob Roberts and Rene' Hall collaborated on most of the new arrangements, dishing up new piano classic compositions!

A&M Records signed Davis and released his song "Fugitive" as a single in 1964. A popular group of that era, known as The Ventures, heard the song and to Jan's dismay, immediately covered it. At that point, Jan decided to take his music in another direction. After seeing the famous "Sabicas" in concert, Davis made a decision to play his acoustic guitar and turned to lighter pop and easy listening. Flamenco music was his inspiration and his Latin-flavored instrumental "Hot Sauce" went Top Ten on Billboard's Adult Contemporary charts.

Arranger, old friend, and fellow B. Bumble & the Stingers' co-writer, Rene Joseph Hall got in touch with Davis and asked if he would be interested in playing solo guitar with an orchestra. Davis was especially delighted in starting his solo playing with a Philharmonic orchestra!

Stone Tiger Records documented one of these shows recorded on California's coastline as "Concert by the Sea," released in 2000. To the delight of his performing arts fans, Jan composed nine Classical and Flamenco songs that he played on dual acoustic guitars.

In 2004, reissue label Sundazed released "Boss Guitar: The Best of Jan Davis," a collection of his '60s recordings including the original version of "Fugitive." Stone Tiger released three new CD albums, "Diversified Genres" and "I Loved You Too Much," along with an 18 track album "Rock 'N Flamenco," by Jan Davis & The Spain Gang, featuring the Top Ten Latin Dance hit, "Flamenco Loco."

Soon after the release of "Diversified Genres," Jan received an email from a New York filmmaker, Ziggy Films, requesting three songs from the CD to be included on a PBS documentary entitled: "Ride On Brother," about how NYFD firefighters who survived the 9-11 horror, wanted to ride their bikes cross-country to thank all the folks they could for their support and prayers during the aftermath of 9-11. (Jan donated all songs requested).

Finding there was interest in sixteen of Davis' songs he recorded, but had only released them on a limited edition CD, a popular Internet company, CDBaby.com, released "Jan Davis Guitar Legacy" for digital downloads only.

Now showing on YouTube: 12 videos, withten from"Concert By The Sea."

Enjoing music and videos from Jan Davis... cool. Drop them a few dollars for support below.