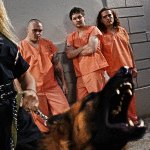 Commerce versus art; capital greed or creative freedom; the cathedral and the bazaar...inspired as much by philosophy as the need to make a very loud noise, Jackal+Wolf are not your run-of-the-mill rock band out looking for kicks, chicks and the migh... Read More

Commerce versus art; capital greed or creative freedom; the cathedral and the bazaar...inspired as much by philosophy as the need to make a very loud noise, Jackal+Wolf are not your run-of-the-mill rock band out looking for kicks, chicks and the mighty moolah.

Exploding on to the local rock scene, this new power-trio featuring Charlie Murder on vox and guitar, with brothers Morgan and Redge O'Kennedy on drums and bass, are more intent on creating great tunes and playing them live than topping the charts, a refreshing change from the hit-obsessed mentality that pervades modern music.

The band's intent is immediately obvious: not only is the title of their debut album, The Cathedral and the Bazaar, a tribute to the free music philosophy that inspires them, but the album is available for free download on the band's website www.jackalandwolf.com, and the band have already pressed 1000 discs to give away at their upcoming gigs.

"The title of the album is originally from a book by open-source software exponent Eric Raymond," explains frontman Charlie Murder, "and it refers to the concept of the cathedral representing commercial, corporate interests while the bazaar represents to complete creative freedom."

The trio's decision to remain independent and embrace the free music philosophy was sparked, in part, by their personal experiences in the industry: Charles and Morgan first met up as co-members of dark rock outfit Velve; the two brothers, meanwhile, had also teamed up previously in alt-rock outfit Ghost.

Also providing inspiration are the writings of free music agitators such as Ram Samudrala and alternative music producer Steve Albini, along with the success of bands like Radiohead and Public Enemy who both embrace the free music philosophy.

"First and foremost our goal is to play great live shows and create great songs to play at those shows," says Murder. "For us the measure of our success as a band is not going to be how many CDs we sell, which is why we are offering our music for free download.

"When you're signed to a label you don't make much money out of CDs sold anyway, and as a rock band, which is a small niche market in South Africa, it becomes even harder to make money off CD sales.

"By using the Internet and the option of free downloads we hope to create a strong fan base and hopefully generate interest both here and internationally, though we will be focusing entirely on the local market initially. First South Africa, then the world!"

While the band have yet to unleash their potently raw riffage and groove-orientated sound in a live setting, they have been hard at work polishing their songs for an expected album launch at the end of July with a national tour to follow.

With influences that range from the classic sounds of Led Zeppelin and Black Sabbath to the metal power of Metallica and the informed vitriol of Rage Against the Machine, punters can expect a mighty show.

In the meantime visit the band's den at ww.jackalandwolf.com, download the album for free, catch up with the latest news and howl along with the rest of the band's committed pack.

Enjoing music and videos from jackalandwolf... cool. Drop them a few dollars for support below.