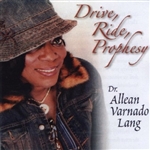 A dynamic and anointed woman, Dr. Allean Varnado Lang is an evangelist, singer, author, songwriter, Bible instructor, and a fireball for God. She has a heart to minister to families and young people. She is also married to Dr. Marvel Lang, an ordaine... Read More

GIEL is a Miami-native Christian Artist, who has been encouraging the body of Christ one listener at a time. With a message of the hope and love found in Christ Jesus, GIEL is spreading the gospel through song through humble lyrics and inviting smoot...

A dynamic and anointed woman, Dr. Allean Varnado Lang is an evangelist, singer, author, songwriter, Bible instructor, and a fireball for God. She has a heart to minister to families and young people. She is also married to Dr. Marvel Lang, an ordained Minister / Singer, and Professor at Michigan State University.

Allean has a special way with youths and their family. Her creativity, quick wit, and humor keep them laughing as she ministers the truth of the Bible. She does ministry in Fine Arts (theatrical and worship dance, flag and banner ministry). She has many years of experience working with youth : in the Junvenile Court System and schools in California, with gangs; as a Youth Guidance Specialist and Psych Counselor in Oklahoma with youth and children; and as a Youth Pastor for six years in Tulsa, Oklahoma.

Dr. Varnado Lang wants all people to understand that Jesus is not some far away thing, but He is a Friend that sticks closer than a brother, and a very present help in time of trouble.

Allean knows the power of God. The Lord delivered her from an abusive past, and He healed her of cancer on August 8, 1985. Time and time again, she has watched God perform His Word on her behalf. She loves God and His word, and she lives it.

Enjoing music and videos from DrAlleanVarnadoLang... cool. Drop them a few dollars for support below.