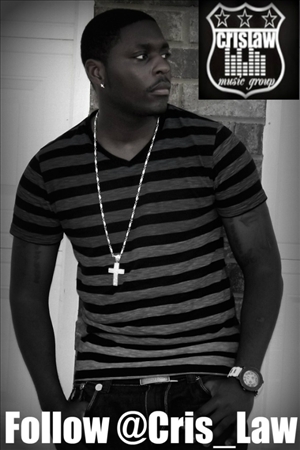 Cris Law also known as Chris Miller born in Trenton, New Jersey moved to Atlanta at the age of 10 and been there since. His music journey began at the age of 5 when he taught himself how to play the drums that was just the beginning for his drum skil... Read More

Cris Law also known as Chris Miller born in Trenton, New Jersey moved to Atlanta at the age of 10 and been there since. His music journey began at the age of 5 when he taught himself how to play the drums that was just the beginning for his drum skills will take him to start playing in his school band advancing his musical talents.

Music runs in his family so it was only a short time before Chris took it up on his shoulders. His mother played piano and was also singer, the brother he idled as a youth started to play piano and his uncle played bells and xylophone leaving him to play drums.

In middle school he started to right his music and express himself by words. Every line he wrote you could relate with everything he was saying. By 9th grade he got his first microphone and everything he put on paper he could release on track. Improving everyday with his musical skills his fans grew.

He performed first at school with a song called “hattin on me” and with every song his fans became more dedicated he has performed at 3 clubs in Atlanta also hair shows, he has performed in jersey, New York and Philadelphia as well and his music is being played all over and has gotten a standing ovation in Toronto on star lite radio an online radio station which head quarters in Toronto. He always stay on his grind and is very dedicated to his music handing out cd’s wherever he goes and fans appreciate that.

So diverse with his rapping he touch basis in hip-hop, gospel hip-hop, and r’nb’, right now cris law is in Atlanta and is working with Philadelphia records and is in association with star lite entertainment he has 40 songs and he is ready for the music life.

Enjoing music and videos from crislaw... cool. Drop them a few dollars for support below.