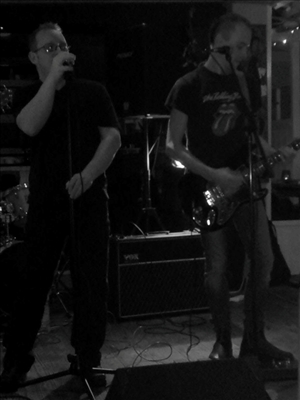 COMEG's recording career began in 2002 in a basement in Devon on a basic home studio. Their first self produced album was released in 2003 and they have since recorded 6 more albums.All albums are freely available to download from the band's website. COMEG would describe their sound as infectiously addictive and anthemic. They have been compared to legends such as U2, Black Rebel Motorcycle Club, Zeppelin, The Cult, and Primal Scream . COMEG has also written several tunes for independent movies and playstation Games. The band are also played on both local and international radio stations and Podcasts. LINKS Website - http://www.comegband.com YOUTUBE - http://www.youtube.com/user/comegband1 Facebook - http://www.facebook.com/comegband Twitter - http://twitter.com/COMEGBAND Myspace - http://www.myspace.com/comeg Soundcloud - http://soundcloud.com/comegband Last FM - http://www.last.fm/music/Comeg Contact email- comegband@blueyonder.co.uk Roger - 07703739655 Coemgen - 07910002311 REVIEWS THE BAND HAVE RECEIVED Comeg have some serious talent. Weighty, bombastic anthems pour out of them like tap water. ~ Backbone - 247 Magazine These guys create not just songs but sonic landscapes - www.bandassist.co.uk To listen to "Touched With Fire", you would never suspect that it had been produced by an independent musician who began recording eight years ago in his Devonshire basement. Clearly the School of Home Studio paid off as each beat of the drum, strum of the guitar and thud of the bass is so crisp, George Martin himself could have produced it - http://www.live-music-scene.co.uk/cd-reviews-content.asp?id=244 "Comeg's songs (One Day) are hook-laden, riff-loaded, emotionally charged works that tend to get right under your skin and haunt you for ages after." ~ Toxic Pete - Toxicpete.co.uk

Enjoing music and videos from comeg... cool. Drop them a few dollars for support below.