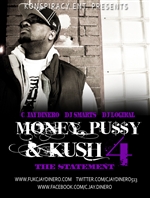 Being raised in the tough streets of the North Avondale section of Cincinnati, OH can make or break someone. C. Jay Dinero, born Christopher Johnson, had to learn fast to survive. With just his mother and younger brother in the house, C. Jay began se... Read More

Being raised in the tough streets of the North Avondale section of Cincinnati, OH can make or break someone. C. Jay Dinero, born Christopher Johnson, had to learn fast to survive. With just his mother and younger brother in the house, C. Jay began selling drugs at a very young age to help provide for his family, but that wasn’t the only “dope” he had in mind.

Being able to identify with the struggles he heard the Geto Boys, UGK & 2Pac rap about, C. Jay decided to pick up a pen and start writing himself. Rapping was a hobby for him. Expressing himself through rhyme became something he loved, but the realities of urban life kept him from pursuing any dreams of being a rapper.

C. Jay Dinero did graduate from high school unlike many caught in his situation, but he also knew having just a diploma can also lead you to more dead ends. He decided to join the U.S. Navy immediately after receiving his diploma as his way out of a bad situation. He served 4 years, but still at heart he knew there was something else out there for him.

In 2007, C. Jay finally decided to pursue a career in what he loved most and dropped his first mixtape entitled “THE YOUNG, FLY & GETTIN' MONEY MIXTAPE VOL. 1". The mixtape did well locally selling over 500 copies, and he shows no signs of slowing down. Since then C. Jay’s released over 15 mixtapes.

C. Jay Dinero has worked with some of the best DJs in Ohio including DJ Smarts, DJ Dimepiece, DJ SKNO, and DJ Logikal. He’s even worked with DJ Jay Rock based out of Florida, Slip N Slide DJ, DJ Rickie Huge, out of Arkansas as well as other out of state DJs to help expand his fanbase. C. Jay Dinero has also shared the stage with the likes of Freeway & Lil Scrappy.

Currently, C. Jay Dinero’s latest single “In Da Car” ft. Toledo rappers Midwest Tone & Spade has been picking up club spins all over Northern Ohio. The song is to be featured on his upcoming mixtape ‘MPK3: The Hangover’ with DJ Logikal scheduled to drop in March 2010. C. Jay & DJ Logikal also have a new mixtape series together dropping soon entitled ‘Get Connected’. As if that’s not enough work, C. Jay Dinero owns and operates a social networking site aimed to help let other artists some shine called www.cincitihiphop.com, and owns the graphic design company, DineroGraphix.

Please login or create a free account to become a fan of C. Jay Dinero

Enjoing music and videos from C. Jay Dinero... cool. Drop them a few dollars for support below.