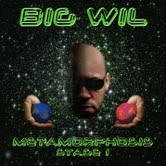 " William "Big Wil" Jackson is a writer, producer, director, entrepreneur, and entertainer. Born in Cincinnati, Big Wil has overcome a lifetime of adversities to show the world that Big Wil is one the greatest living entertainers. As a child Big Wil ... Read More

" William "Big Wil" Jackson is a writer, producer, director, entrepreneur, and entertainer. Born in Cincinnati, Big Wil has overcome a lifetime of adversities to show the world that Big Wil is one the greatest living entertainers. As a child Big Wil was abandoned by his natural parents and spent most of his youth being handled by the state and various foster guardians. Between the moving, verbal abuse, and alienation Big Wil cultivated a passion for music. Even though families changed his mentors kept him on his path to greatness. When you experience a live Big Wil performance you will see the intensity of Prince, the showmanship of James Brown, and the drive of Michael Jackson dripping from every pore of his being. Big Wil graduated from the nationally recognized Cincinnati's School for the Creative & Performing Arts, where he majored in Drama and Vocal Music. Upon graduation Big Wil started a family and had a son, three years later Big Wil is a single parent. Still, his pain was the slingshot Big Wil needed to propel him to become a great entertainer. In 2005 Big Wil released his debut LP (The Ultimate Controversy) on his independent label named Ultimate Empire Entertainment. The Ultimate Controversy LP was accompanied by a music video, which Big Wil produced the video was called (Strugglebaby) won Big Wil his first video music award. More awards were to follow: Strugglebaby (2006 Blue Chip), PAIN (2007 Philo Video Festival), Apologize (2008 Philo Video Festival), Go Time (2009 Blue Chip & Philo Video Festival) Not to fail to mention Big Wil independently released 3 full length LP's through his entertainment company; the albums in chronological order are The Ultimate Controversy (2005), The MC's Notebook (2007), and Mr. Jackson's Hip-Hop (2009). Big Wil followed up with his first world wide release album THE ESSENTIAL a.k.a THE ESSENTIAL BIGWIL which can be downloaded on Amazon Itunes and cdbaby (http://cdbaby.com/cd/bigwil ) Big Wil has been privileged to grace many stages encompassing the Mid-West, most recently WESTFEST, Northside Rock N Roll Carnival, and Big Wil was featured in a special project commissioned by the State of Ohio's Department of Alcohol/Drug Addiction Services. You can find Big Wil's rendition of "This old Man" on ONE TO GROW ON -A Children's CD for Special Children. This budding artist has planted seeds of success and is starting to reach for the sun.In March 2011 Youtube asked him to be a youtube Partner , which is the highest youtube position on youtube.Big Wil is planning to release his new album Spring of 2011 called METAMORPHOSIS which will show the evolution of Big Wil. You can follow Big Wil at http://www.twitter.com/BigWilTV , http://facebook.com/bigwilmusic and at http://youtube.com/Wilmrbadguy

Enjoing music and videos from BigWil... cool. Drop them a few dollars for support below.