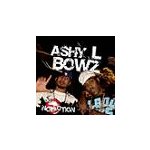 Artist Information Biography If Dave Chappelle and Will Farrell formed a rap group they would probably name it the Ashy L Bowz. Luckily for Brooklyn emcees Deeno Snuff and Triple X they stuck to comedy so the name was available for them to use, but... Read More

Being raised in the tough streets of the North Avondale section of Cincinnati, OH can make or break someone. C. Jay Dinero, born Christopher Johnson, had to learn fast to survive. With just his mother and younger brother in the house, C. Jay began se...

DarkFyre Entertainment is an urban music company based in Cincinnati, OH. We specialize is hiphop and rap, but are always looking to expand upon what we do, incorporating spoken word poetry, R&B and anything else with a great sound. We strive to stan...

Biography If Dave Chappelle and Will Farrell formed a rap group they would probably name it the Ashy L Bowz. Luckily for Brooklyn emcees Deeno Snuff and Triple X they stuck to comedy so the name was available for them to use, but when it comes to hip hop these two lyricists are no joke. The Ashy L Bowz have been performing live in NYC hot spots for years and on Ash Wednesday 2008 they released their independently distributed debut album, No Lotion featuring comedian Donnell "Ashy Larry" Rawlings. The disc gained them plenty of accolades including nominations for the Underground Music Awards, Hollywood Music Awards, Unsigned and Independent Awards and finalists for Rap Album of the year in the 8th Annual Independent Music Awards.

Recently the Ashy L Bowz have released three new mixtapes available free for download on their website www.NoLotion.com and other popular music download sites. However it was their marijuana themed Going Green mixtape along with the quarter of a million views and comments of their popular "How to roll a Blunt" series that prompted the content editor at HighTimes.com, homepage of leading marijuana magazine High Times, to feature them as Unsigned Band of the Week earlier this year. The first rap group to grace the section since its debut.

Currently the Ashy L Bowz are performing at open mics and showcases in and around New York City and plan to release a remastered version of their debut album No Lotion. They are also recording new mixtapes and plan to release another yet to be titled album before releasing of their highly anticipated follow up "No Lotion Squared"!

Enjoing music and videos from Ashy L Bowz... cool. Drop them a few dollars for support below.