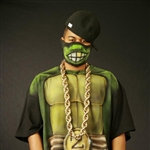 ZONE THAT DUDE a.k.a. YOUNG ZONE - FACE THE MUSIC The state of hip-hop is in constant flux. Trends change as often as fans change clothes (or at least the labels on them); too many artists fail to lay a foundation for long-term success as with the r... Read More

ZONE THAT DUDE a.k.a. YOUNG ZONE - FACE THE MUSIC

The state of hip-hop is in constant flux. Trends change as often as fans change clothes (or at least the labels on them); too many artists fail to lay a foundation for long-term success as with the right track and proper timing, anyone seemingly can make a hit.

But once an artist undergoes hardship and struggle, they face two choices: Fade away forever or Face the Music. And that’s exactly Young Zone (a.k.a. Zone Ill), is ready to do with his new album of the same name.

Born Dean Hummons, Jr. in Dayton, Ohio, Young Zone is best known by longtime followers of the Midwest hip-hop scene as one half of the group Definition. Backed by his man and fellow Dayton native Ill Poetic, Definition has established itself as one of the Midwest’s premiere tandems, opening up shows for such hip-hop notables as Killer Mike, Little Brother, Brother Ali and the Living Legends among others. Zone’s music talents should come as no surprise, however, given his musical roots: His musician father has worked with Midwest R&B legends including Roger Troutman and Heatwave and his uncle was a songwriter for Ohio Players. Throw in three brothers who are also aspiring emcees and Zone’s life as a hip-hop artist seems like a forgone conclusion.

But as life often has it, it hasn’t come without a lot of perseverance, hard work and dedication.

“All them things that happened just made me not fear anything anymore … I felt like I didn’t have a real home or comfortable place mentally and physically so all the songs I did for this album, I felt like i was living inside the music,” says Zone about his new album. “It made me feel like that’s the best place for me to lay my head at. I rested my soul and my mind in every single song so it was easier to deal with all the negative things I was dealing with.”

“All them things” that he refers to include legal troubles and a car accident while traveling with Ill Poetic.The stress became too much to bear for a while, forcing Young Zone to have to get his priorities … and his life together.

But as the horn-laced boom bap of “Still Here” and soulful anthem “Heart of the City” show, Zone is back with a vengeance.

“With my mom having Lupus, it made me realize that we don’t live forever and we don’t just live for our selves; you live for other people,” he says. “So I’m basically going for broke on every single song on this album and any song I’m ‘gon be featured ‘til the end of my career.”

While Face the Music (Overground/Definition Music) shows a definite growth in maturity and focus, the album also several club bangers (such as the infectious “Fat Gold Chain” and smoked out, mellow groove of “Wobble”) and laid back jams perfect for the club to just rolling through the ‘hood with your windows down in much the same fashion of his first album, The Foundation.

The Foundation was the beginning of a mission to bridge the gap between the underground and mainstream; Face the Music is just the next step.

”I want people to realize that people are multi-dimensional individuals who have lots of sides that they can express,” Zone says. “Hip-hop is a form of expression and no one can judge you on how to express yourself a longest comes from the heart. I want to break that barrier where people can stop stereotyping music and (just) look (at it) as music.”

He hopes his music will have a similar affect on his fellow artists and the music industry as well.

“You don’t have to accept the box that people put you in … The way things are now, if you’re a ‘conscious rapper,’ you can’t have a song being aggressive and ‘street.’(Likewise), ‘street’ rappers might get looked differently if they get ‘conscious’ - at the end of the day, it’s a big risk that you might lose your creditability,” Zone says. “A lot of people that do the type of music (artists like) Little Brother and Slum Village (do) get cheated out of what they deserve because record labels don’t understand how to promote and marketing that sound. I had problems trying to break my music because of the same issues they have. People don’t want to take a risk in breaking this sound, but listeners love it.”

But once the world falls in love with Face the Music, don’t expect Zone’s mission will be complete.

“I love to go to ‘hip-hop’ clubs and I love to go to the big clubs that play your pop hits and street bangers, but I want to be in a place where they can mix both. I want to hear radio stations that mix both equally,” Zone says. “I feel like (there’s) no place I can enjoy fully because it’s no balance. That’s why I think I stand out from the pack (because) I’m the sound of balance.”

Enjoing music and videos from Young Zone... cool. Drop them a few dollars for support below.