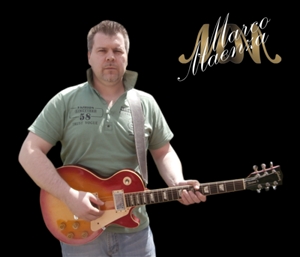 Marco Maenza was born in Livorno (Italy) in 1976. His music taste ranges from rock blues to classic rock. Italian blues virtuoso, started playing guitar at the age of 14. His music is an amalgam of all the various rock and blues he heard as a child, ... Read More

Solo male musician from the Philly, PA_ USA Area. There will be more music posted by this Artist in 2013/14. Thanks for listening ! COPYRIGHT 2013 ALL RIGHTS RESERVED.

Marco Maenza was born in Livorno (Italy) in 1976. His music taste ranges from rock blues to classic rock. Italian blues virtuoso, started playing guitar at the age of 14. His music is an amalgam of all the various rock and blues he heard as a child, in his studio production he care above all the melody of his songs, the guitar sound is very emotive with his own style. Marco keeps busy in his home studio composing and arranging music and making recordings. On these home recordings Marco sings and plays all of the instruments while also sequencing the drum parts.

In January 2009 Marco released his first solo album "A Whisper of Joy". Since the release of A Whisper of Joy Marco continues to record a constant flow of new music enabling him to Climb the ReverbNation Blues Charts and finding himself at the number 1 spot in Italy and as high as 4th on the global charts. On December 12 2007 Marco was featured artist of the day for Myspace. A blog was created to support Marco's music that at the time was only instrumental. On October the 15th 2008 Marco was one again a featured artist of the day once again posting Marco's music and a support blog. On April 29th 2009 Marco was the featured artist on Smokin Tunz Radio. Smokin Tunz Radio played a few of Marco's songs and then reviewed them. On September 20,2009 Marco appeared on the Musicians Social Club's Blog Talk Radio program. He was interviewed and they also played some of his music. On October 25, 2009 Marco was again interviewed on radio by Jan Carroll at The Jan Carroll Show "The Lady Plays The Blues" on krushradio.com

In May 2010 Marco released his second solo album "Stone House of Blues", it's a blues/rock album with original songs, melodic and powerful guitar, bluesy italian vocals.

In August 2010 Marco was Featured Artist on the IMRadio Home Page.

In October 2010 Marco released the third solo album "Midnite Train", a great pleasure for Marco has been the collaboration with Jan Carroll (she has written almost all the lyrics), an album with ten good blues and rock original songs.

In June 2011, the albums "Stone House of Blues" and "Minite Train" have been reviewed at "The Blues Report" (Blues Underground Network Presentation) bluesunderground.blogspot.com/2011/06/marco-maenza-italian-blues-virtuoso.html

In June 2011 Marco released a mini free album "The Unpublished Tracks", this is a free download album with 6 rare instrumental songs recorded and produced in 2007, remastered 2011. this album is not released as physical cd but only digital, get your tracks free here www.reverbnation.com/tunepak/3366580

In November 2011, Marco released the 5th album "Stain Blue", an album with 13 original tunes. Lyrics on two of the songs by Jan Carroll and a collaboration with Richie Auriemma on Auriemma's original song "Blue Eyes Cryin (Dee Dee Blue)", Richie also played mandolin on "Chase The Blues Away".

Enjoing music and videos from Marco Maenza... cool. Drop them a few dollars for support below.