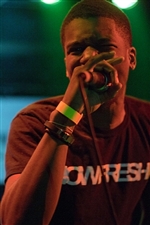 Hugh M. Saddler (born September 9, 1988) is among the next generation of up-and-coming hip hop artists. He started writing short stories at a very young age, displaying his extraordinary imagination and sense of humor. Music became one of his early i... Read More

Hugh M. Saddler (born September 9, 1988) is among the next generation of up-and-coming hip hop artists. He started writing short stories at a very young age, displaying his extraordinary imagination and sense of humor. Music became one of his early influences as he watched music videos on television with his two sisters in the living room of his parents' home, thus opening up a whole new area of writing: poetry. He began keeping journals of his poetic theories, experimenting with song lyrics when inspired. Eventually, song development slowly replaced all other forms of writing, marking the beginning of his hip hop career.

At about age 13, he joined his first online hip hop message board titled "Lyrical Beatdown" and began challenging other [older] emcees to lyrical duels, or battles. He developed his verse-writing skills over the next few years and started recording vocals at about age 15. Several years later, at the age of 22, he continues to master his skills as a musician, perfecting his style of writing and molding a flow similar to none other than himself: Evo Von Psalm. His style, both electrifying and energetic, emulates the future of the hip hop industry.

He is currently an active artist under the Hammington Entertainment Group (HEG).

In early 2011, he teamed up with Ford in the Focus Global Drive to donate $10,000 to Feeding America. Many of his upcoming performances will focus on raising money for charity and highlighting Ford's efforts to revolutionize the automobile industry.

Enjoing music and videos from KidPsalm... cool. Drop them a few dollars for support below.