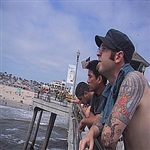 INDOFIN, together since 2002, is an unusually unique skapunkreggae powertrio from Austin TX. From these very modest beginnings and years spent at what seemed like futile efforts, Indofin has certainly come a long way, becoming one of the defining ban... Read More

Taylor Skelton is the lead singer/guitar player for rock band Whisky Jack. Over the past few years, he has worked on a side project to bring a different form of music to the airwaves. This new project is a softer side of rock/indie music. Finally rea...

The beginning of the second quarter of Indonesian culinary world was marked with a rather surprising news from the music industry, as five of creative youngsters decided to form together a music band called "Dekuliner"; and it was not by incident, th...

JSH is an Independant artist out of Springfield Il. JSH is a one man project of John S Hofmans. John has put together a small Independant Studio / JSH studios where he produces his own cds from his home. John comes from the Hard Rock days of the late...

Ever since I was a young starry eyed 16 year old in my first rock band back in 10th grade, I wanted to make a career out of music. The actual music bug hit me at a very young age, circa 1991 at the age of 9. My older brother ...

INDOFIN, together since 2002, is an unusually unique skapunkreggae powertrio from Austin TX. From these very modest beginnings and years spent at what seemed like futile efforts, Indofin has certainly come a long way, becoming one of the defining bands of the central Texas skapunk scene. They managed to play showcases during SXSW from 2003-2007 and even earned a spot on the Vans Warped Tour in 2007. Since the release of their selftitled debut album in the spring of 2005, the band has played over 300 shows in over 50 US cities, as well as doing extensive regional touring around their homestate TX. Indofin has always maintained a strong DIY work ethic, booking five of their own tours, and they have never had a label, an agent, or manager. They have been fortunate enough to share the stage with many of the nation's touring acts including Voodoo GlowSkulls, Badfish Sublime Tribute, The Expendables, Outlaw Nation, The Stingers, The Supervillains, and many more. Despite playing with bands of every imaginable category, the band continues to stick out like a sore thumb in the central TX live music scene, refusing to confine their music to the boundaries of any particular genre. Stripped down now to 3 of the 5 original members, the band is taking their sound in a fresh new direction for the next record, but fans will still be able to experience the raw energy and intensity that Indofin puts into every live performance. Currently, this eclectic group of misunderstood punker sluts has been hard at work on the new album, which they plan to put out independently before the end of 2009. In the last few years, the band has endured numerous obstacles(carjackings, stolen equipment, drug & alcohol addiction etc.). Indofin often learned the hard way many of the cruel realities of the music industry, yet their uncompromising dedication to their craft remains stronger than ever. Indofin's staying around awhile, so be sure to check out a show if you get the chance; you won't regret it and it might even change your life. INDOFIN IS- TJ HUERTA, ALBERT HUANG, & DONNY MANN.

Enjoing music and videos from Indofin... cool. Drop them a few dollars for support below.