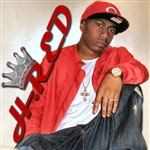 It's undeniable. When you hear Harlem Red&rsquo;s music, you're hearing a piece of someone&rsquo;s life. Harlem Red&rsquo;s troubled past was part of the package that inspired him to be like a phoenix rising from the ashes. Growing up a young man awa... Read More

It's undeniable. When you hear Harlem Red’s music, you're hearing a piece of someone’s life. Harlem Red’s troubled past was part of the package that inspired him to be like a phoenix rising from the ashes. Growing up a young man aware of the fast life world of drugs and money, he quickly developed from an innocent young man or little pup to a vicious pit bull. Paralleled with his reddish complexion and aggressive nature, his Harlem neighborhood coined him the nickname RedNose, after the Red Nose Pit Bull.

The legendary Harlem native has consistently delivered stories of urban life, painting pictures of his struggle, his progress and his focus on success. Bringing Harlem to the forefront, Harlem Red insists on telling his story the way he see’s it. He say’s “There are more than just drugs in Harlem, Harlem has become a tourist attraction bringing people from all over the world to see it’s landmarks and hear of it’s history”. Now they will hear of a young entrepreneur named Harlem Red.

He’s just like every other dude right down the block, he's just WAY Flyer. Taking his street business sense and utilizing the skills he earned when obtaining his bachelors degree in business, he is sure to be on his way to success and accomplishments referencing mogul’s like Russell Simmons as his inspiration. While in pursuit of a lucrative career in music, fashion, and film, Harlem Red is also working diligently to acquire a developmental youth program that will allow him the chance to help under privileged children achieve their dreams.

Before his mainstream breakthrough he was popular from Hip Hop DVD’s and Mixtapes such as SUB Zero DVD, Uncut DVD, Shady Record’s: Fight Club and Desert Storm and Jack The Ripper Mixtapes. It was through these outlets, Harlem Red was able to see the need and demand for his story to be told through his music.

Prince of The Struggle, one whom many may have felt couldn’t and wouldn’t make it, is making his Royal presence known widely through out NYC. Getting the approval and support of one of NYC’s biggest DJ’s, DJ Envy, and one of NYC's well known event hostess Lady El (1st Lady of the Murda Mamis), Harlem’s own Red Nose is more than a rapper on the come up but a businessman on the Rise.

Many have asked why he hasn’t crowned himself the King of Harlem and humbly he replies” I had to Fight for my crown like many other’s. I feel I‘ve done so much and have so much more to accomplish so therefore I’ll be the Prince, for now.”

In the land of Harlem USA, there has never been someone so lyrical or has done it as great as Rapper BIG L, but with the new wave of music and the change in the music industry Harlem Red is bound to be crowned and known for his greatness. His music is told to youth and a community that continues to see hardships and has a need for inspiration and reassurance to no know that One of their own can make it . Harlem Red is a perfect example of how someone can succeed and turn their lives around. He has learned from so many artist and their mistakes he is bound to build an effective enterprise. There is no other that can take their street and diploma based credibility and successfully market and target their audience and succeed all on their own being and accord like the one and only Harlem Red.

Check For The Prince of The H.. Harlem RED

Enjoing music and videos from Harlem RED... cool. Drop them a few dollars for support below.