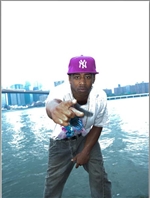 Brooklyn's own Flashdabizkit is poised to hit the scene after several years of gaining notoriety in Brooklyn's mix tape circuit. Flash officially made his name known in 2006 with the release of "Grimelord Vol.I" which introduced listeners to his ... Read More

Brooklyn's own Flashdabizkit is poised to hit the scene after several years of gaining notoriety in Brooklyn's mix tape circuit. Flash officially made his name known in 2006 with the release of "Grimelord Vol.I" which introduced listeners to his unique voice and gritty flow, crafted by the harsh and unyielding streets of Brownsville, BK. Flash was able to witness first hand the realities of street life and the music industry early on in life. Music was a part of Flash's home life since his birth. Flash's grandfather, Willie Denson (R.I.P Willie Denson) published more than 250 songs recorded by artist such as Aretha Franklin, Gene Pitney, The Ronettes, The Shirelles and many more. Willie used to sing his music and other jingles to flash and he also encouraged his young child to pursue a career in music. With the help of this male figure Flash was able to avoid the snares and pitfalls of street life, but he endured enough bumps and bruises along the way to know that this way of life didn't contain many options. He began rhyming at the age of 16 and didn't look back. In 2008 flash put out another mix tape with a crew he formed called hometown heroes, that mix tape graced the pages of the source magazine, mtv.com, allhiphop.com, and a few other media outlets. While still being a solo artist in 2009 flash preformed at s.o.bs, pyramid lounge, the cave, karma lounge, Don Hills just to name a few. With a universal style and a unique voice flash was able to connect with a number of producers from different states that could match his style. In 2010 flash released a full-length mix tape/LP called all seasons. With a flow that changes in every song and a unique sound, flash is a rare breed; he is a breath of fresh air with a new flavor of music.

Enjoing music and videos from FlashDaBizkit... cool. Drop them a few dollars for support below.