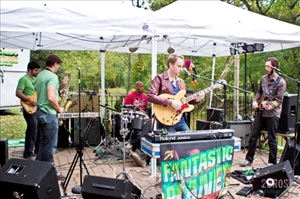 “Fantastic Planet” is a danceable, mini-orchestral, glitter sweeping, bucket smashing, rock and roll voyage, whose base camp is out of Philadelphia, PA. Their mantra: to evoke crowds to move their bodies like no other rock opus has before them, while... Read More

Tyler - Lead Guitar/Vocals Hi! This is Tyler. Ive been playing guitar for almost 17 years, over half of those professionally. I like blues, blues rock, classic rock, RhythmnBlues, Country and Jazz. I...

Formed in 2006, Between The Rain is a hard rock trio out of the Bronx, NY. Tim Donlon, the spark and fuse of the band is a rock musician from the Detroit area who traveled to New York City to find the perfect members to complete the band’s lineup. Af...

“Fantastic Planet” is a danceable, mini-orchestral, glitter sweeping, bucket smashing, rock and roll voyage, whose base camp is out of Philadelphia, PA. Their mantra: to evoke crowds to move their bodies like no other rock opus has before them, while breaking the hearts of fem-bots with every sour power chord and xylophone smash.

After a long night at a roadside tavern, somewhere between Interstate 95 and Quadrant 44, a disheveled group of failed “somethings” would meet and discuss their version of a “Fantastic Planet.” Although they were not the brightest stars in the galaxy, nor the dregs of your usual dive bar musicians, these six multi-instrumentalists were passionate in their belief of what the future could bring.

In an effort to build a planet of sound, our heroes would combine their previous recording and performing knowledge. Thrusting forward with a love of space influenced artist like David Bowie and ELO, new wavers Talking Heads, and low budget science fiction films, they would work vigorously to create a sound that would burn like the heart of the sun.

With whiskey filled hearts, and ice in their veins, the controls were set and the new band of misfits piled into the aircraft, otherwise know as, "the S.S. Showmanship."

Enjoing music and videos from FantasticPlanetBand... cool. Drop them a few dollars for support below.