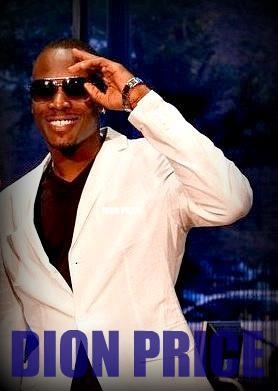 R&b/pop recording artist Dion Price is a fresh face to the music scene. Combining a mix of both R & B and Pop, his music as well as performances exude a fresh, entertaining and diverse flavor. Born August 13th in Chicago, Dion Price relocated to Li... Read More

R&b/pop recording artist Dion Price is a fresh face to the music scene. Combining a mix of both R & B and Pop, his music as well as performances exude a fresh, entertaining and diverse flavor. Born August 13th in Chicago, Dion Price relocated to Livonia Michigan in 2003. It was in Michigan where his music career began to pop off. Although his talent became very clear to him and those around him ...at a young age, he did not begin to pursue his solo career until the age of 17. Dion Price’s first solo performance, in 2005, was at Franklin High School. He received a standing ovation for his performance; “the feeling that came over me when I walked on that stage was the most invigorating sensation I’ve ever felt. By the time I walked off stage that night, being a recording artist was no longer a dream. It was a goal.” Since then, Dion Price has been writing, recording, dancing, MC’ing, as well as performing all over Detroit. In March 2010, he had his first headlining concert “Swag On,” which sold out at the Vistion Tech Center on the campus of Livonia Schoolcraft College. All of the proceeds of this show went to Haiti Relief. Following the concert, Dion was able to build a strong foundation and fan base. Since then Dion has opened up forsinging group, Pretty Ricky, and has had another headlining show of his own. Hes made various appearances and peformances at festivals in Michigan and is continuing to addperformancesto his schedule. Price’s motivation for his vision stems from various places. His struggles, his happiness, his obstacles, all tell a story relatable as well as moving to many. There is also the fun, upbeat side of his music, able to make anyone feel a rush through their body. “Music reaches out to other lives, it affects people in a deeper place and I want to contribute to that. Making music for other people is something I NEED to be apart of,” stated by Dion Price.Visit Dions music page: www.facebook.com/dionpriceisYOUTUBE: www.youtube.com/thedionprice

Enjoing music and videos from DionPrice... cool. Drop them a few dollars for support below.