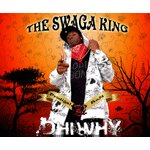 The Nigerian music industry is advancing and more independent Record Labels are emerging, Dhiwhy is one of those making the change. With the support from his family he plan to release his debut album on his self-owned imprint Prodeegal Muzik with an ... Read More

The Nigerian music industry is advancing and more independent Record Labels are emerging, Dhiwhy is one of those making the change. With the support from his family he plan to release his debut album on his self-owned imprint Prodeegal Muzik with an affiliation with Le Blonde Entertainment an upcoming independent record label.

Dhiwhy aka the Swagger King is a dynamic talent with a class, from the Federal Capital in Abuja straight to Lagos. Dhiwhy brings to the whole city of Lagos his debut single track “Swagger” featuring Morel of the World Famous Academy. Dhiwhy is a true definition of a real hip hop mind, from his way and approach to the music game.

His kind of styles is a cross music genre, he sings as an R&B artist also sings as a pop artist which makes him a genuine.

He delivers with great attitude and when ever he performs he keep making the music fans ask for more.

His debut single “Swagger” is a hot club banger, the song has been heating up clubs in US and UK just from an mp3 drop from the internet through an exchange between two DJs and the rest is history. The track has three version,1* ” Swagger club mix" ,2* "Swagger rock mix" featuring Kaka and the real version of the song.

The track “Swagger” is becoming a hot cake in most part of US and UK as Nigerians in US and UK are using the song as ring tones .The track (audio & visual) is bill to be officially released to all Radio and TV stations in Nigeria and other countries soon.

Enjoing music and videos from Dhiwhy... cool. Drop them a few dollars for support below.