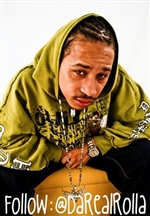 David Shyheem Mims, professionally known as "Rolla", is the CSRA's adopted son from north Philadelphia between 16th Susquhanna and Dauphin . I started out just playing with rap when I was sixteen years old, freestyling for his friends and family. The... Read More

David Shyheem Mims, professionally known as "Rolla", is the CSRA's adopted son from north Philadelphia between 16th Susquhanna and Dauphin . I started out just playing with rap when I was sixteen years old, freestyling for his friends and family. Then, in 1998 I formed a rap group known as "Fort Knox" which consisted of me (known as Snotty Nose), Mill Trife, Sonny Red and Terry Knorris. We roared through the underground scene for a while until we cought da eye of Lisa Bonet of Everyone's Envy Management but things didn't work out. Being that I'm a "Philly-bull" I'm fed off of what I've seen so I'm influenced from the likes of Gilly da Kid, Major Figgas, Most Wanted, Beanie Seagle, E Ness , the Notorious B.I.G, Jay-Z and my environment (North Philadelphia and Augusta). Why do I call myself "Real Rolla"? In the memory of my O.G. Robert "Real Rolla" Taylor told me to keep my head straight. He also told me how to make good business moves as well as street moves. He passed in 2004 and now his name lives through me. In 2007 I moved to the south to get a fresh start and go full-throttle at developing my music real hard by doing various features at shows and local open mics in the Augusta, Georgia area. Soon after I began making appearances I met up with T.J. Turmon, the CEO of SouthStarr Entertainment (voted 1 independent label in the CSRA 2007). After doing a few mixtape tracks with J in the lab, I basically put all that I had all on the table and we went on a simple handshake and the rest is history. Now it's 2008, exactly one year later and we've just released my first single entitled "I Like" featuring Cuzzo. People ask where do I see myself in a year? I tell them I see myself and SouthStarr Entertainment as one of the top up-and-coming labels in the south, performing my first LP during the birthday bash in Atlanta, being awarded as the CSRA's artist of the year and to consistantly keep putting out good music.

Enjoing music and videos from DaReal_Rolla... cool. Drop them a few dollars for support below.