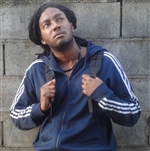 Many artists strive to stand out, be noticed others, just strive to be unique. This is the story of the Da Face, so named because what is taken at face value barely skims the surface of the true character of this artist. His style, hip hop/rap but w... Read More

Many artists strive to stand out, be noticed others, just strive to be unique.

This is the story of the Da Face, so named because what is taken at face value barely skims the surface of the true character of this artist. His style, hip hop/rap but with a Trini twist. His audience, Trinbagonians. His material, issues that any and all can relate to. His fuel, to bring awareness to serious issues plaguing the nation through an entertaining and digestable medium.

Da Face started singing in 2003, inspired by mainstream artists like Kanye West, Eminem, 3 Suns, Machel Montano and Bunji Garlin. Initially a hobby, his writing and singing became serious after positive feedback from friends. As the decision to become a professional settled in, Da Face spent hours perfecting his cadence over 16 bars that would become his own stamp on T&T’s music scene.

In 2007, Da Face joined local rap/reggae group Krucial Klan. This experience was instrumental in cementing a musical path for Da Face and gave him the drive to continue as a solo artiste after the group folded. The year 2007 would also be a defining year as Da Face released his first single entitled “Forever”. The song received favourable but modest airplay on radio stations giving him the inspiration he needed to continue recording.

It was around this time Da Face began work on a pivotal artistic project that had never before been attempted in Trinidad; a full concept album dedicated to college life at U.W.I addressing the stereotypes and the hardships that one would face as a student.

This concept album would later be titled, “Hitchhiker’s Guide to UWI” and is set to release October 16th 2009. During the July/August holidays of 2009, Da Face released his first mix tape titled “Recession Music” detailing life for an artiste during the economic recession. “Girls Like Radio,” a humorous lead single is a crowd favourite and is known by many audiences wherever he performs. “Recession Music” was an astute move for the artist and an empathetic one for the businessman as he released it for the ‘recession’ price of $20. This highlighted Da Face’s connection to his audience and his ability to give the people what they want.

As his premiere full-length album is primed for release, Da Face prepares to lead in urban music done Trini style.

Enjoing music and videos from DaFace... cool. Drop them a few dollars for support below.