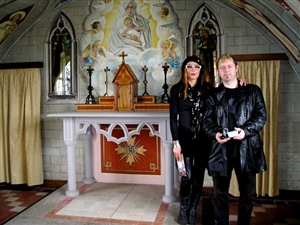 INFO: The Bird And The Monkey - Sarahjane Swan and Roger Simian - formed in Galashiels, Scotland, in 2010 and began collaborating on experimental pop / indie rock / electronic songs and homemade music videos. Dunbar-raised Sarahjane Swan (a graduate in sculpture from Gray’s School of Art in Aberdeen) released two solo singles before teaming up with Simian, an indie musician / songwriter brought up in Edinburgh and the Scottish Borders whose previous bands included John Peel favourites Dawn Of The Replicants, Pluto Monkey and The Stark Palace.

The Bird And The Monkey songs have been aired on Radio 1 in Scotland and BBC 6 Music. One track, Moon Moth, was used in the soundtrack of BBC2 / online teen soap, The Cut.

The duo released the Ossie Dean EP and a DVD featuring ten music videos on Athene Noctua Records in winter 2011.

The BBC Music Video Festival 2011 picked one video, Do You Wanna?, to screen at Edinburgh Big Screen for two weeks.

Enjoing music and videos from BirdNTheMonkey... cool. Drop them a few dollars for support below.