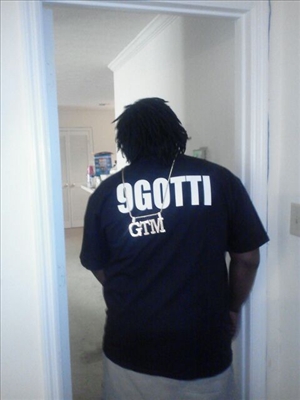 There are several genres of music, and Lyrical Storm is focused on making the art of spoken word a force within the music industry. Writing for over 12 years, Storm first began his practice of writing spoken word in middle school through love poetry....

It's been said that Rapper Meechie G is Realer than the Rest. Surviving 2 attempts on his Life after 2 nearly fatal shootings that almost ended his life on 2 separate occasions, Short stints in jail here & here & the Cutthroat Mentality of the Drug T...

Henry Knight IV known as Quotez the Ariez was born in Ohio on March 27,1989. Quotez was introduced to the world at an early age, listening to the greats of r&b such as Maxwell, Gerald Levert, Keith Sweat, and more. &ldquo; I use to always listen to t...

9Gotti, (A.K.A. Mr. Network, Da Mayor, JR Pimpin Stack, Gold Mouth) is a rapper, producer, and R&B singer from Atlanta, GA. Listeners sometimes compare him to artists like Rick Ross, Lil Wayne, Drake, Young Jeezy, or T-Pain, but 9Gotti prefers not to be compared to anybody. Says 9Gotti: “I’m doing me! Taking my music outside of the box. I’m not scared to take a chance.” 9Gottis latest album, “Swaglanta” has earned widespread praise, and the leadoff single on the album, “iGet Money,” has had more than 20,000 downloads. He is currently working on numerous projects, and continues adding to his over 100 mixtape appearances.

Growing up on Atlantas South Side, 9Gotti always had a love of music. As a child, he would often dance or try to beat on things, sing or rap. Music has always been in his DNA. He has been rapping since the age of 4, and at the age of 8 he wrote his first song. At, 13 9Gotti wrote, produced, and recorded his first song, and began a lifelong passion for music that continues to drive him to this day.

When 9Gotti was a teenager, his family moved to the North Side of Atlanta, and his music ambitions took off. Lead by himself and Jay Capone, the group N.A.B. began recording music. Local exposure followed, fueled by appearances on the popular local mixtape series “Crunk City.” This lead to 9Gotti working with the group Y.B.L., that secured a recording contract with Pure Pain Records. After the untimely death of Pure Pains star artist Camoflauge, 9Gotti and Y.B.L. went their separate ways. 9Gotti then signed to 3C Recordings with then collaborated with Huntsville artist Skinny Mann to release the album “Iceberg & Polo” as Gold Mouth & Skinny Mann. 9Gotti later reunited with N.A.B., and released the singles “Dickies,” and “Wassup Ho,” which earned radio play through Atlanta. Working with Shawty Lo and D4L lead to N.A.B. releasing their biggest hit, “Go Head.”

The group N.A.B. was put on hold, and 9Gotti began focusing on his own music and on starting his label, Game Tyte Music Group (then Game Tyte Entertainment). Promotion efforts have found 9Gotti recording several exclusive solo mixtapes with well-known DJs, appearing on dozens of mixtapes from DJs throughout North America and Europe, and performing at shows throughout the Southeast. 9Gottis popularity in Florida especially lead to him winning awards from Slip n Slide DJs and The United DJ Alliance. 9Gottis mixtape “Hustlemania” with DJ Nelly Nell was especially well received, eventually leading to nearly 20,000 downloads and hard copies distributed across the entire US. 9Gotti released an EP, “Can I Get Paid?,” and an album, “Swaglanta,” both distributed digitally through most major online music stores, including iTunes and Amazon. Collaborating with Dough From Da Go of Dough Muzik, 9Gotti is preparing to release “Mr. Network”, with appearances from numerous major artists. He is also affiliated with Da Black Al Capone and 1-800-StarvinArtists/Clover G, and is working on a project titled “Internet Junkies” with Da Black Al Capone and featuring other well-known artists.

Enjoing music and videos from 9Gotti... cool. Drop them a few dollars for support below.